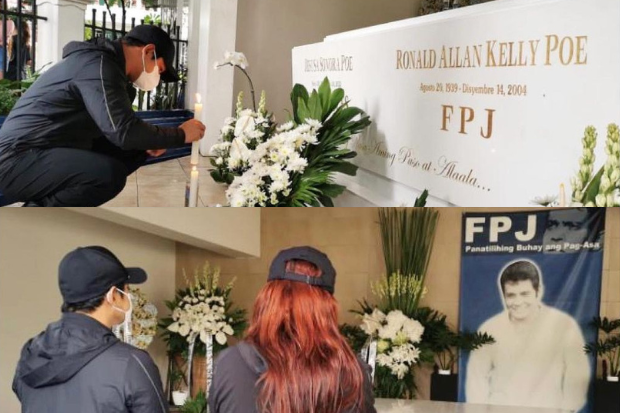 Coco Martin and Julia Montes have paid tribute to “Da King” Fernando Poe Jr., known in the industry as FPJ, who would have turned 83 yesterday, Aug. 20.

Martin was accompanied by Montes when he lit candles for Poe and his wife, late veteran actress Susan Roces, as seen on Martin’s Instagram page yesterday. Poe and Roces are buried next to each other at Manila North Cemetery.

(Happy birthday to the person who gave inspiration to many Filipinos in need. You are our idol when it comes to kindness and helping others. You will remain as our inspiration. The one and only king in our hearts, “Da King” Fernando Poe Jr.)

Martin then saluted the late movie icon while he and Montes approached the couple’s grave, as per another Instagram post, also yesterday.

“Ang iyong alaala ay habangbuhay na nagdadala ng pag-asa sa bawat Pilipino at mananatili itong buhay sa aming lahat,” he added. (Your memory will forever bring hope to every Filipino and will stay alive in all of us.)

This comes after the hit action series “FPJ’s Ang Probinsyano” concluded last Aug. 12. The series, based on Poe’s 1997 film of the same name, starred Martin as the lead character Cardo Dalisay while Montes portrayed his love interest Mara.

Martin bid farewell to his character last week and expressed appreciation to those who supported the show, including Roces and her daughter Sen. Grace Poe. JB