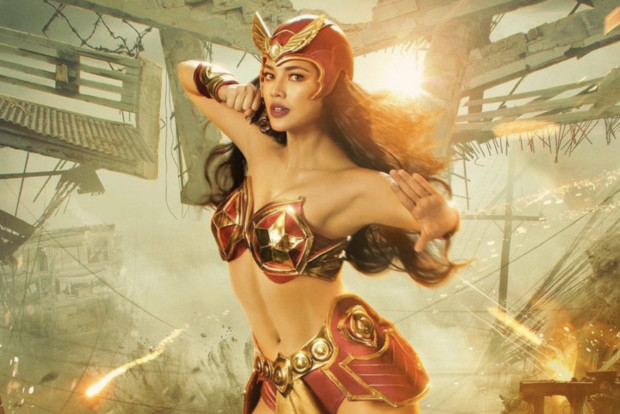 Jane de Leon has finally flown in full costume as the new Darna with her recent transformation into the iconic Filipino superhero.

The actress’ character Narda started her first day on the job as an emergency medical technician after an earthquake hits the town of Nueva Esperanza, as seen in the episode of “Mars Ravelo’s Darna” yesterday, Aug. 19. The episode was also released on ABS-CBN Entertainment’s YouTube channel.

Despite her drive to help others, Narda’s human form had limitations and she ended up falling to the ground while scaling a destroyed building. Narda sees an apparition of her mother Leonor, the first Darna (Iza Calzado), and the magical stone that gives Darna’s superpowers falls from the sky, then lands in front of her.

Narda decides to officially take on her duties as a superhero by swallowing the stone and shouting “Darna!”. Now given Darna’s superpowers and costume, she flies around the building to find wounded individuals and bring them to safety.

(I need to do this because the greatest sin you can commit is having the ability to help, but choosing not to.)

Read Next
Most TV critics applaud ‘House of the Dragon,’ others find it less magical
EDITORS' PICK
How not to retire as an ex-president
Shop smarter with vivo’s big 12.12 holiday deals
Lawmakers eyeing more changes in Maharlika plan
House energy committee chair Arroyo bats for cheap electricity
The vivo Y02 is now available in the Philippines for only PHP 5,299
Hidilyn Diaz wins only gold missing from her collection
MOST READ
Jovit Baldivino, ‘Pilipinas Got Talent’ winner, dies at 29
LPA enters PAR, to likely strengthen into tropical depression in coming days – Pagasa
Andi Eigenmann, family in Manila for a quick visit; Ellie dines with grandma Jaclyn Jose
11 Filipino imports named to Japan B.League Asian All-Star team
Don't miss out on the latest news and information.