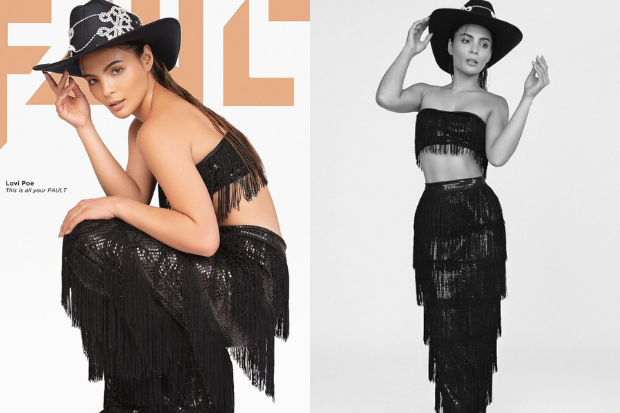 Lovi Poe got all dressed up as a cowgirl when she landed on the recent cover of the Los Angeles-based FAULT Magazine.

The actress donned a black two-piece fringe ensemble and a cowboy hat as she posed for her photo shoot with the magazine, as seen on her Instagram page yesterday, Aug. 18.

“What a fun shoot with a fun crew! Here’s to taking risks and stepping out of the norm. And I know we hear this often, but let’s go bigger and reach greater heights, yeah? Can I get a yee-haw?” she said.

Aside from her cowgirl look, Poe looked stunning in various other attire including: a blacked webbed gown by Gomez-Garcia, a black leather bikini and jacket, and black bikini set with harnesses that was paired with an oversized coat by Charles and Ron, as seen on the magazine’s Instagram page, also yesterday.

This is not the first time that Poe graced the cover of a Los Angeles-based magazine as she had appeared on the cover of Now Magazine back in July last year.

The actress recently launched her own production company, C’est Lovi Productions, where her British producer boyfriend Monty Blencowe also serves as an executive.

Poe currently stars in the Philippine adaptation of the South Korean thriller “Flower of Evil.” She will soon be appearing in the upcoming Idris Elba-produced film “The Chelsea Cowboy,” in which she portrays British blues singer Dana Gillespie.  /ra

Read Next
Idris Elba on the ‘fascinating merger’ of drama and edge-of-your-seat action in ‘Beast’
EDITORS' PICK
Individuals affected by ‘Karding’ now over 157,000
Newbie gamers are in for a treat with the power-packed feature of vivo Y16
House energy committee chair Arroyo bats for cheap electricity
Bongbong Marcos says PH ‘open for business’ with new Clark Airport terminal
Karding damage to infrastructure at P23M
Reignite your passion with the vivo Y35
MOST READ
LPA enters PAR, may develop into tropical depression
Badoy not with Office of the President, NTF-Elcac, under Marcos admin — solon
‘Sardinas ang ulam’: Senators lament soldiers’ P150 daily subsistence allowance
Angelica Panganiban ‘duguan, sugatang mom’ one week into breastfeeding
Don't miss out on the latest news and information.