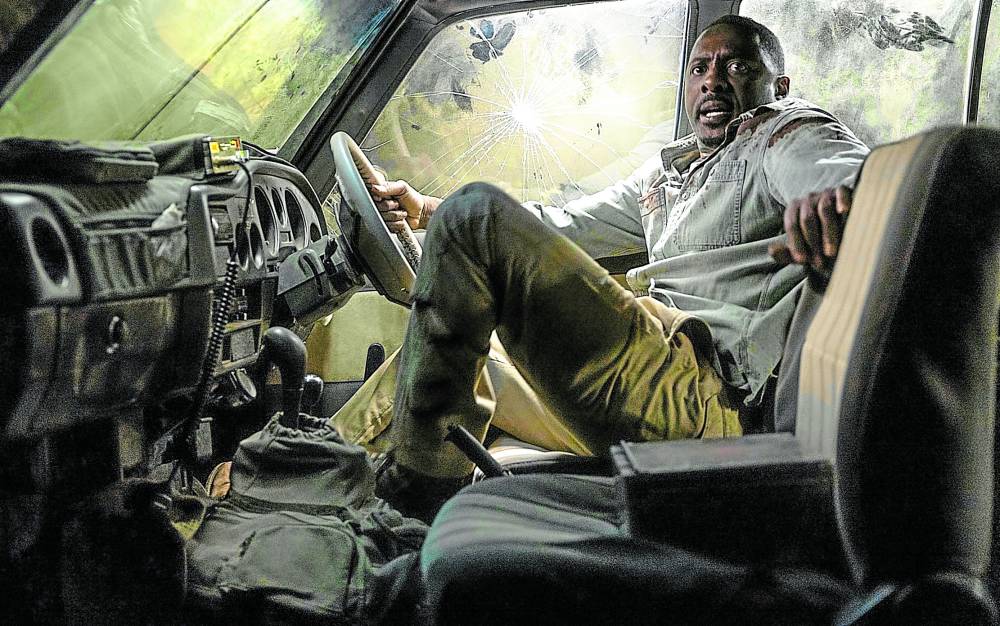 The last time we spoke to Idris Elba, we were on the bullet train, the Shinkansen, from Kyoto to Tokyo to talk about his 2017 reality show “Idris Elba: Fighter.” “I don’t make decisions to please the fans,” the actor told us, as he put aside the scripts of two films—the Stephen King flick “The Dark Tower” and “Thor: Ragnarok”—that he was studying during the two-hour and 20-minute trip.

Last week, we saw Idris again, albeit in a virtual roundtable, to discuss his role in Icelandic director Baltasar Kormákur’s terrifying new thriller “Beast,” about a lion that goes rogue after poachers kill its pride.

The film, which will open in Philippine cinemas next week (Aug. 24), casts Idris as Nate Samuels, an American physician who takes his teenage daughters Meredith (Iyana Halley) and Nora (Leah Jeffries) to a game reserve in South Africa after his estranged wife succumbs to cancer.

The trip was arranged by antipoaching advocate Martin Battles (Sharlto Copley of “District 9”), a close family friend who runs a game reserve, to fix Nate’s strained relationship with Meredith, who blames him for breaking up the family, as well as for his failure to treat his ex-wife.

It’s this family conflict that raises the stakes for Nate, who’s suddenly thrust in a life-or-death situation when he and his daughters are caught in the crossfire between the vengeful lion and the remorseless poachers.

We watched the movie alone in a preview room, shaken by the gravity of the do-or-die drama as much as by the evils of poaching. It was even more heartbreaking for us to learn later that there are only about 20,000 of these regal beasts left in Africa these days, compared to 200,000 about a hundred years ago—that’s a 90-percent decline in its population! Moreover, lions are now extinct in 26 countries in Africa. 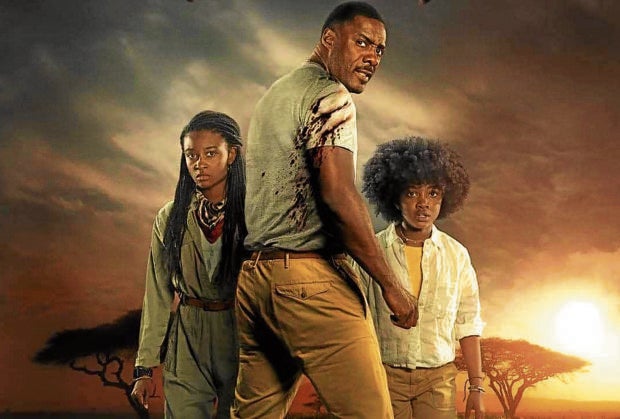 “I learned so much from this film,” said producer Will Packer (“Girls Trip,” the “Ride Along” franchise). “I didn’t realize how prevalent poaching was. I knew it was an issue, but actually going there, talking to the locals and understanding that ecosystem, I realized how much of a problem it is.

“You know, this film is not in any way intended to be preachy. It is meant to be entertaining, but it does have an educational element underneath its story … because it does deal with this very real issue. That was always the intention—and I think we accomplished that.”

For Baltasar, the undertaking was even more personal. “When I was kid, I used to cut out pictures of lions in Africa and put them in a little folder, which my mother brought out when I told her that I was going to make this movie. So obviously, wanting to do this came from deep inside me. And I’ve always been fascinated by Africa and its flora and fauna, so when this project came about, there was nothing that could stop me from going there and doing this.

“This story of survival is very important to me because I am also a father of five—I have one stepdaughter and four children. That’s how it is with family. When you get a little older, there’s nothing that replaces it, so it’s hardest when it breaks apart and all you want to do is rebuild it.

“I connected to that because I’ve gone through those kinds of things. I thought that if I got this right, there will be more tension, and viewers will care more for these people. I also liked the father’s journey and how he wants to win his daughter’s trust back.

“Nate and his girls don’t just have to deal with the personal trauma they’ve been through, but they also have to come together as a family to face this deadly challenge. Moreover, I was drawn to its visceral man-versus-nature element. It feels like a metaphor for the challenges in life.”

And it didn’t hurt that he had a formidable actor like Idris, who’s known as much for his intensity as an actor as his brawn.

“On one hand, here’s a movie star with all the charisma that comes with it,” Baltasar explained. “On the other, you’ve got a fine actor who’s known for projects like ‘Luther.’ Idris’ performance strikes the perfect balance between dealing with his more vulnerable dramatic scenes in the beginning and, later, as a guy who convincingly takes on the lion.”

For Idris, the movie isn’t meant to “demonize” the lion. As Nate, Martin and his daughters run for their lives, we quickly realize that the lion is as much the victim as the humans it wants to tear to pieces.

“Yeah, I definitely believe the symmetry between man and lion is connected by grief, loss, the pain of separation, anger and desperation,” the actor said. “Both Nate and the lion feel that. We didn’t want to just villainize the lion and see him as a beast. It was important to layer its backstory. It needed to have a reason as to why it’s doing this … because it’s very uncharacteristic for lions to do something like this.

“As it turned out, Nate and the lion’s situations are similar in many ways—the survival instinct, the separation from family, the pain over loss and injury. All of that stuff seeps into who they both are in the film.” 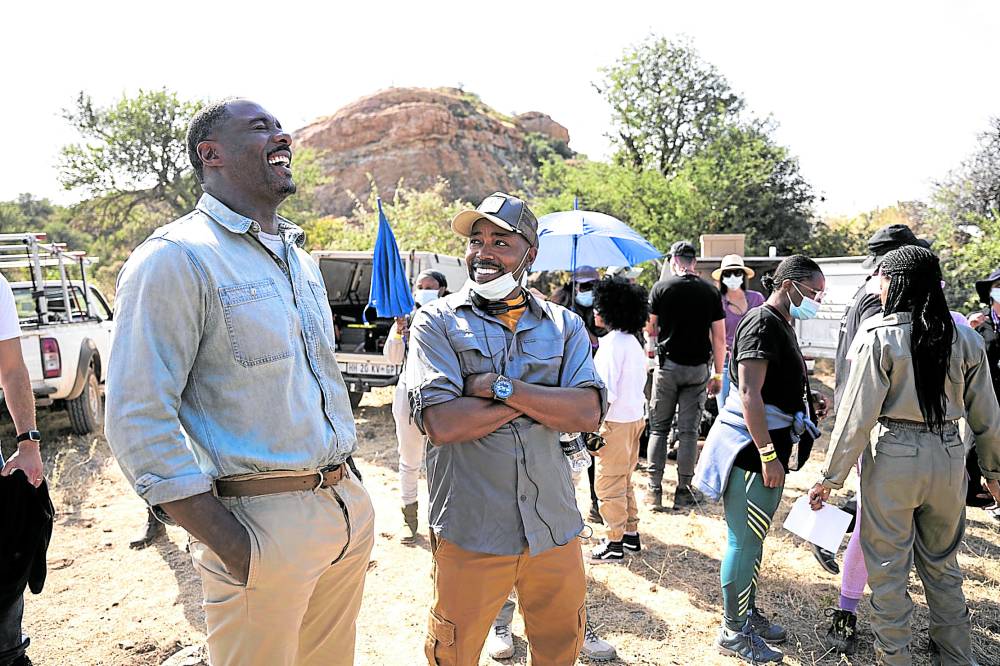 Producer Will Packer (right) with Elba

Idris said that the element of survival presented another factor that greatly appealed to him. “It’s a key component to the narrative,” he said. “This character is definitely not an action hero nor a superstar wielding a gun. He’s just a guy caught in a really terrible situation—and that was appealing to me.

“It wasn’t really a difficult role to get into. I’ve never been chased by a lion—I’d probably be exactly like Nate in real life if I find myself in that situation. But it was certainly exciting for me to portray a character that doesn’t have some of the tropes around action heroes that we come to see in films. And he’s vulnerable, for sure, particularly where his relationship with his children and the horrible scenario they find themselves in are concerned.”

While everything about the film is the real deal, the lion was not—so establishing a sense of truth and convincing vulnerability were crucial for Idris’ portrayal, especially when it was time for his character Nate to go mano-a-mano against the CGI beast.

“The biggest challenges were just figuring out and calibrating the level of fear for Nate,” the 49-year-old actor shared. “Look, this is a man who doesn’t really fight, let alone a lion. There’s this moment in the film where I punch a lion. I look at that and think, ‘I’m not sure how this guy’s gonna punch a lion!’

“Nobody punches a lion, you know? So, these are things that we really had to dissect and understand. I was conscious that again this guy isn’t an actual hero. So, for me, those are the difficult areas that I had to work hard on to appear believable.”

Speaking of believability, the setting was another crucial element in the film. 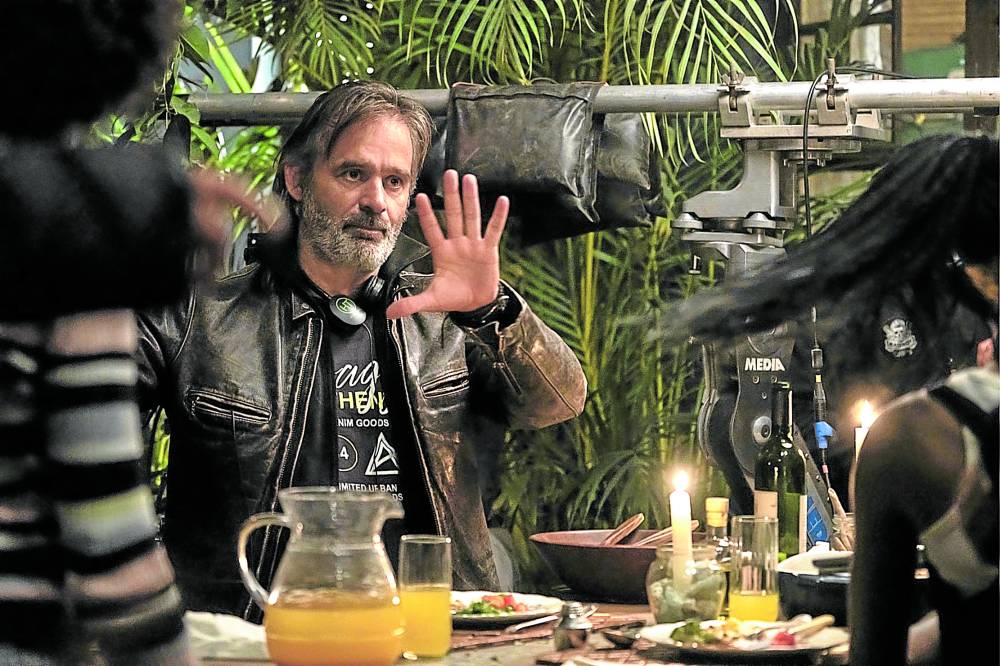 “The environment is a big character in the film,” noted Idris. “It is part of why and how Nate and the girls are isolated. South Africa is the home of Mere and Norah’s mother and Nate’s ex-wife. So it was really important that we went to these locations because they offer such incredible depth of field in this landscape.

“If you watch this in a cinema, it just makes the audience think that, apart from the lion, they’re actually there—and they’re not just watching a green-screen performance. Everything was shot in real locations.”

Has the actor already seen the film with the CGI lion incorporated into “Beast’s” cinematic mix?

“I saw the movie for the first time yesterday,” Idris admitted. “Seeing it in full was fascinating, with all of the layers that I know are there, but are not there for the audience. I do think that the special effects team did an incredible job.

“To be honest, I don’t like watching myself in the films that I made. I typically go to a premiere, watch the first 10 minutes, then leave. But for some reason, I stayed, which was torture! However, I was fascinated by the way we have brought out the ferociousness of this lion and how we were able to convey the element of fear in the human characters—it’s a compelling merger!”