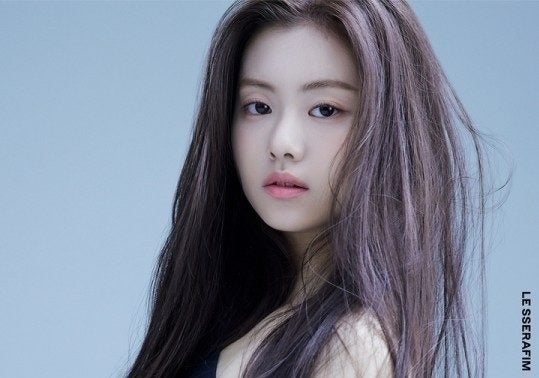 Kim Ga-ram, a former member of girl group Le Ssserafim, spoke out about the bullying rumors against her that eventually led to her departure from the band.

Kim on Wednesday posted a letter on her friend’s Instagram account, explaining her side of the unresolved bullying controversy. The statement begins with an apology for coming forward so late.

Kim claimed that she has “never” used violence or bullying against others. She broke her silence 21 days after her former agency, Source Music, decided to terminate its exclusive contract with Kim following the bullying accusations made against her.

“I was just an ordinary student,” she said. “I was scared that my past actions would destroy everything I had worked so hard to achieve. But as the days went by, I was more afraid of the criticisms made against me.”

She also explained about the violent incident that took place when she was in middle school, presenting as evidence to support her position the autonomous committee for school violence’s document.

She claimed that she was only trying to help her friend, who herself had become the victim of bullying.

“At that time, I thought it was the right thing to do to help the victim… I didn‘t know the seriousness of the situation and I thought my actions would only be encouraging. Looking back, I was very immature and childish,” the statement read. “At that time, friendship was the most important thing to me. My methods were wrong, and there were many mistakes and clumsy actions, but I don’t want to hate myself for that time.”

Kim mentioned that the first two weeks of group activities after making her debut were like a dream. She also thanked her fans for loving and supporting her while vowing to work harder to become a better person.

Meanwhile, Le Sserafim debuted under Source Music, an affiliate of Hybe Labels, as the first all-female act to be launched by the multi-label entertainment company. The act debuted with its EP “Fearless” on May 2.

Amid the snowballing controversy over bullying allegations against Kim, she was expelled from the band last month. Following Kim’s removal, Le Sserafim has been continuing its activities as a five-piece act. DC/RA