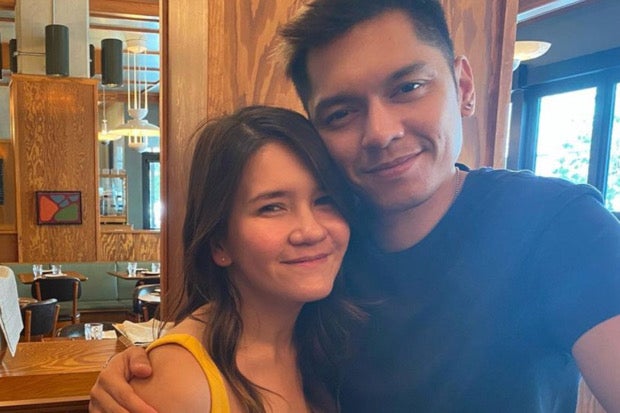 Carlo Aquino and Serena Dalrymple delighted fans of the 1998 film “Bata, Bata… Paano Ka Ginawa?” by giving them a glimpse of a recent “family reunion” after several years.

Aquino and Dalrymple were seen in an embrace in a restaurant, as shown on Dalrymple’s Instagram page last Friday, Aug. 5. While the location was not disclosed, the reunion appears to have taken place in the United States, where Dalrymple resides and where Aquino is currently at for the Star Magic U.S. tour.

“Akala mo lang wala, pero meron! Meron! (You thought that there was nothing but there was something!)” she said, referring to Aquino’s famous line in the said film. She also concluded her post by adding the hashtag “family reunion.”

Aquino and Dalrymple portrayed the characters of Ojie and Maya in the Chito Roño-helmed film, as children of veteran actress Vilma Santos’ role Lea Bustamante. The movie is based on the novel of the same title by Lualhati Bautista. Aquino and Dalrymple also starred together in the comedy-drama film series “Ang Tanging Ina.”

Aside from their recent meeting, Aquino and Dalrymple also reunited through the wedding of Dalrymple’s sister in 2018. The two have kept their ties with each other, with their most recent social media interaction seen last May when Aquino expressed happiness over Dalrymple’s relationship with her fiancé Thomas Bredillet. JB