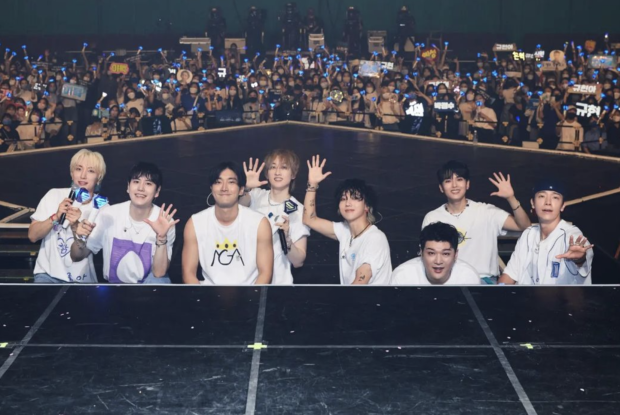 Super Junior has postponed its concert in the Philippines scheduled for today, Aug. 6., and will instead do a meet-and-greet with fans.

“First of all, after many long discussions between the promoter and Super Junior members, we both agreed that it will be difficult to properly hold ‘Super Junior World Tour – Super Show 9: Road in Manila’ as scheduled. However, the members wanted to meet and greet the fans who came to Manila to attend the concert, so we’d like to ask everyone with tickets to enter the concert venue on time,” it stated.

Label SJ asked for the public’s understanding given the situation and told Filipino fans, or ELFs, that details on tickets and schedules will be announced soon.

This comes hours after the label announced the sudden passing of member Eunhyuk’s father, and days after member Siwon tested positive for COVID-19.

Eunhyuk was “unable to depart” for the group’s concert in the Philippines due to his father’s death, as per the agency’s Twitter post earlier today.

Label SJ added that the funeral for Eunhyuk’s father will be held privately with relatives and close acquaintances only, then asked ELFs to give Eunhyuk privacy and time to mourn.

Meanwhile, the agency disclosed earlier this week that Siwon contracted COVID-19 and would not be joining his bandmates in the Manila concert, as per a statement on its Twitter page last Wednesday, Aug. 3. The statement, originally written in Korean, was translated to English by the Korean news agency Soompi, also Wednesday.

Label SJ stated that Siwon has taken a pause from all of his scheduled activities as he self-quarantines, in accordance with government health guidelines.

“Super Junior World Tour – Super Show 9: Road in Manila” was supposed to be held in Mall of Asia Arena. It would have been the K-pop group’s sixth performance in the Philippines.  /ra