Starstruck in Manila: OPM at MoA 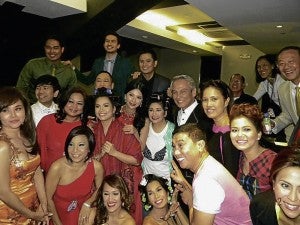 Saturday, June 16, is a night I shall not soon forget. Many, many stars were gathered under one roof for a special concert produced to formally launch the Mall of Asia Arena, a spanking brand-new multipurpose venue in the metropolis—yes, the one where Lady Gaga drove a motorcycle across the stage, the Philippine flag flapping behind her.

The roster of artists that performed consisted something of a casting coup on the part of the production team. In no particular order, let me see if I can name them all: 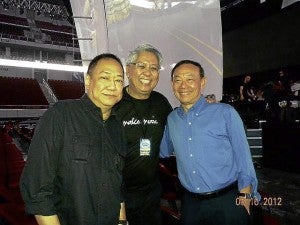 The flow of the show was very tight, much to my delight. The hosts kept things moving smoothly from one song number to the next, and the next, and the next. From production numbers to solos and duets … tributes to the still-living and breathing creative forces that wrote much of the music performed that night … and accompanied by one of this country’s finest orchestras with a master at the helm.

However great the show turned out to be, though, I have to say that rehearsals were far more fun. Well, for us anyway.

I’m a sucker for well-performed OPM (Original Pilipino Music), and that afternoon’s final rehearsals at the MoA Arena jettisoned me into a special kind of heaven. Many of the performers were people I watched on television as I was growing up, or performers I had grown up with as we made the rounds of television shows, live concerts and whatever else was going on back in the day. And the best part was, none of these veterans showed any signs of age or deterioration. I’m convinced that there must be something in the air, or the water in this country. 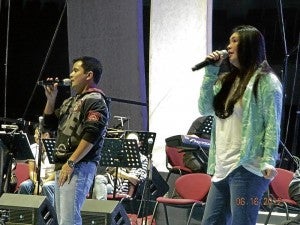 As audience members outside of their numbers, the performers were in the front section … many sat together, others in solitude. However, the collective reaction from the entire hall once a performer was finished (or even while singing) was generous and hearty. There was a lot of screaming and clapping. In short, it was probably the best audience anyone could ask for, very vocal in its appreciation.

Although I enjoyed everyone and everything, I do have my favorites: Freddie Aguilar singing “Anak”; Jose, Wally, and Pokwang making that whole arena shake with laughter; watching Ogie and Regine sing a few of their hits (it was just so great to see her on stage again); Jed belting out his solo with a voice that never lost its boom no matter how high it got; Juris’ pristine and clean vocal quality; Arnel crooning Side A’s “Hold On”; Dulce just being Dulce; and seeing Piolo’s performance jump upwards in quality from rehearsal 1 to rehearsal 2, given who he was singing with (Jed, Richard and Juris).

It was just so much fun to feel the wheels turning in his head. Oh yeah, and seeing my brother stand up in the audience when he was introduced. That’ll never get old.

It was a special night, one that is now extremely rare in the local entertainment scene, when a large cache of the best singers this country has ever bred are brought together to perform

in concert. There were singers from the two larger television networks under one roof. I just about thought that the roof would cave in, because this just doesn’t happen anymore. And that’s very sad.

Once upon a time, shows like “Icons” at the MoA Arena were commonplace. Every few weeks or even every few months, there would be a concert or an event that placed many great voices together. There were no TV network clashes, no having to move heaven and earth, just a bunch of performers coming together for shows. Now, occasions like this one are few and far between, so just how incredibly special, rare and wonderful that night turned out to be was a blessing. It certainly wasn’t lost on any of us, and I’m hoping the audience enjoyed the show.

I pray for another gathering of stars. So many were unable to join us due to their own hectic schedules or previous engagements. I wish for it only so they can join in the fun, the craziness, and the laughter a show like this can bring. 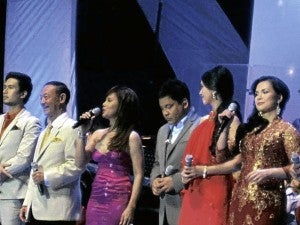 And now, life continues, as life does. Rehearsals for “God of Carnage” have begun by the time you read this. It’s opening very soon at the Carlos P. Romulo Theater of RCBC Plaza. (I’ll do my normal shameless plug closer to the time). But through these next few days, I’ll have stars in my eyes from the memories of Saturday night.

And lest I ever think it was nothing more than a dream, I had a poster autographed by everyone in the show.