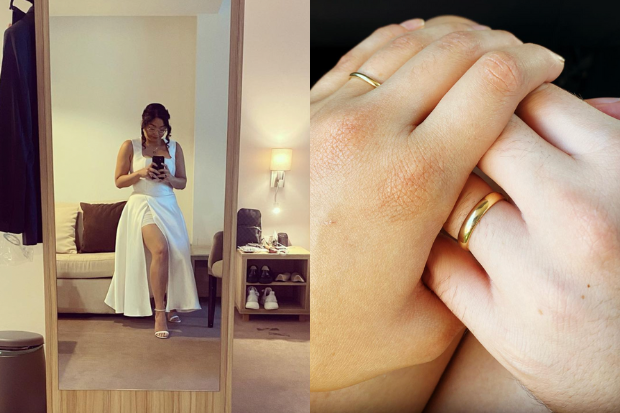 Zia Quizon has confirmed that she is now married by giving “proof of wife” to those who are “concerned” about her wedding.

Quizon also gave a glimpse of herself wearing a white dress for what appears to be her wedding day.

“I could never thank you enough. Especially to my in-laws, who made all of this possible and to whom I am eternally and inexpressibly grateful. And to my Mama, for always being by my side. And Tito Conrad—now, our Godfather—for always being on her’s,” she said.

Quizon earlier hinted about tying the knot through a poem for her father, the late “King of Comedy” Dolphy. She also showed a necklace with a heart pendant, two rings, and the names “aleksa + zia” written on a circular object.

Singer Zsa Zsa Padilla, Quizon’s mother, then flew to Serbia earlier this month to be with Quizon on her “special day.”

Dolphy and Padilla were together for 23 years before the comedian passed away due to obstructive pulmonary disease at age 83. Aside from Quizon, they also have an adopted daughter, Nicole. Padilla is also the mother of TV host-singer Karylle, who she had with her ex-husband Modesto Tatlonghari.  /ra