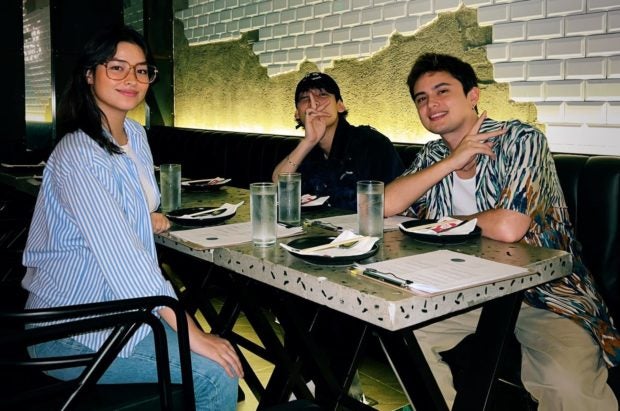 Liza Soberano and James Reid are again seen with BamBam of the K-pop group GOT7, amid speculations that they are working on a collaborative project.

The Thai artist gave fans a glimpse of himself with Soberano and Reid as they ate a meal together at a restaurant in Manila, as shown on his Twitter page today, July 28.

BamBam said that he got to try sisig with the two Filipino artists, but did not explicitly state if there is an upcoming collaboration in the works, based on his interaction with fans.

“What did you eat with James and Liza? I hope you are having fun,” one @iamirishhhh asked him.

“Sisik? Am I saying it right?” he answered.

Another netizen, @iAmBebelicious, meanwhile, asked BamBam if the clipboard at their table had lyrics to his supposed collaboration with Reid and Soberano.

sisik? am i saying it right?

Speculations that Reid, Soberano and BamBam are collaborating have been circulating for weeks. It first started earlier this month, when Reid and BamBam were tagged in an Instagram Story by one Mark (@porksterr) from the Korean company Aria Group.

Mark then showed the two artists together, along with Soberano, on his Instagram page last July 22.

If Soberano, Reid and BamBam are indeed working on a project together, it would mark the second time that Reid joined forces with a member of GOT7. He first collaborated with GOT7’s Jay B for his song “Hello 2.0 (Legends Only),” which was released in March.

BamBam arrived in the Philippines earlier this week for a fan event and a joint concert with Jackson Wang and boy band TREASURE. Upon his arrival, he was urged by his fellow K-pop artist Sandara Park to try tocilog during his stay in the country.  /ra