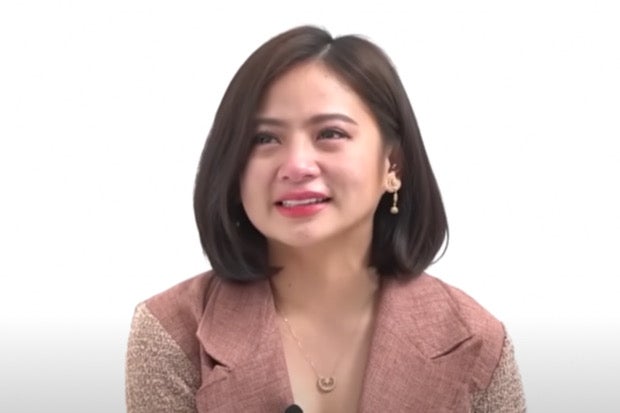 Ella Cruz opened up about the bashing she received over her “history is like chismis” statement, and named Sen. Imee Marcos as one of the people the actress spoke to to ask for advice.

It can be recalled that Cruz drew criticisms from netizens after she likened history to gossip during a press conference for an upcoming film about the Marcoses. The actress added that it is hard to determine if history is factual as it is “filtered” and with “bias.”

Cruz spoke about the controversial issue after she was asked by King of Talk Boy Abunda on how her remark came up, during an interview via the Abunda’s YouTube channel last Friday, July 22. Cruz explained that during the press conference, she was asked what her “point of view” is on the history about the Marcoses, to which she gave the said statement.

Cruz then became emotional before Abunda when he asked her about her realizations amid the issue, stating that she learned to be strong and stand for herself.

(Usually when I talk to people or the press, I make [the conversation] light because I do not want a very serious talk. But I was told, “This is not the time to joke around,” so I said, “Maybe they misunderstood the way I talk and my humor.”)

(I asked myself, “Where did I go wrong? What have I done wrong? Did I hurt anybody?” But I know within myself that I did not hurt anyone. Maybe I have offended some people but that was not intentional, right?)

Cruz talked about how she lost her trust on certain people in her life who did not reach out to her, but instead talked bad about her regarding the issue. Cruz also disclosed that she and Marcos got closer at the time after the actress asked the senator for advice.

(I told her, “Senator, can I have a hug? Because you have been bashed for 36 years but still, you are here and you pay no attention to them. As for me, I have only been dealing with it for a few weeks and I am already having a hard time. She told me, “That’s nothing. You can do this.”)

Cruz added that she is thankful to Marcos as well as Darryl Yap, the director of the actress’ upcoming film, for helping her create a video where she and Marcos tackled the said issue.

When Abunda asked Cruz what advice she could give herself, Cruz stated that she needs to be strong amid the challenges because she believes there is success at the end of it all.

Meanwhile, among the criticisms Cruz drew was from esteemed historian and author Ambeth Ocampo. He stated via Facebook: “Don’t confuse history and chismis. History may have bias but it is based on fact, not opinion. Real History is about Truth, not lies, not fiction.” While pro-Marcos supporters also bashed the historian, educators and scholars came to his defense and pointed out the dangers of trivializing and discrediting history. JB