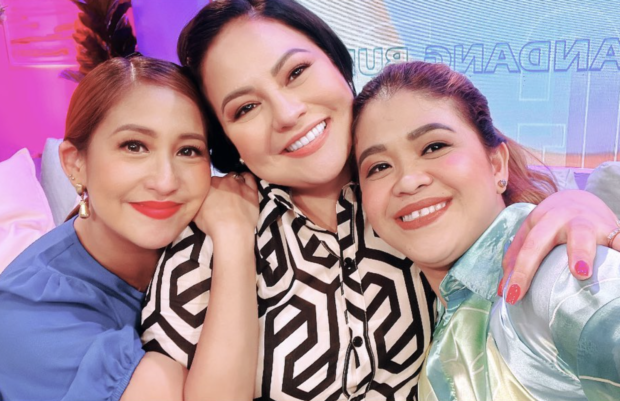 Karla Estrada on Thursday, July 21, expressed her appreciation for her “Magandang Buhay” co-hosts Jolina Magdangal and Melai Cantiveros, as well as ABS-CBN bosses, a day before her farewell episode airs on the morning talk show.

Estrada spoke about her friendship with Magdangal and Cantiveros while showing a photo of them hugging each other, through Estrada’s Instagram page Thursday.

“I will miss the good [five] years mga Momshieee!!! Naging mabigat ang desisyon [pero] mas naging matimbang ang pag-unawa ng isa’t isa,” she said. (It was a heavy decision to make, but the understanding among us outweighed all else.)

(I will miss our happy and drama-filled bond which is incomparable and which only the three of us know. Our friendship which was tested so many times will never be forgotten.)

Estrada also extended her gratitude for the opportunity and trust given to her by her bosses who, according to her, have already become her friends.

(And to everyone behind “Magandang Buhay,” thank you so much for the lessons that strengthened us. I love you all! I pray for everyone of us to have peace in our hearts, and to have a liberating journey toward a good life.)

Estrada temporarily left the show when she ran for a party-list seat in the May 2022 elections. Asia’s Songbird Regine Velasquez filled Estrada’s spot as guest co-host, but also left last month for her judging stint in “Idol Philippines.” Velasquez was then replaced by actress Judy Ann Santos who marked her TV comeback in the morning talk show.  /ra