Sandwich on how playing live music affects its selection of songs 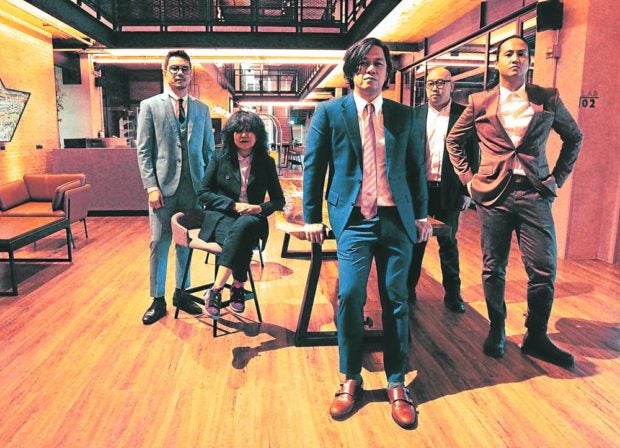 If they were to quantify the importance of playing live music, members of the alternative rock group Sandwich said it constitutes about half of their creative process: It’s their “bread and butter”; it influences their curation of tracklists and selection of singles; it’s the thing that has kept them, well, “sandwiched” for about 25 years.

“As artists, our existence is about creating, committing, recording and publishing our art and music. But what many people fail to realize is that our bread and butter is doing live shows. It’s a fifty-fifty mix. But suddenly you lose the other half [due to the COVID-19 pandemic]. That was hard for us,” guitarist Mong Alcaraz said in a recent virtual conference.

Sandwich—also composed of frontman Raymund Marasigan, guitarist, Diego Castillo, bassist Myrene Academia and drummer Mike Dizon—is known for their frenetic performances and showmanship onstage. In any case, they had to find an outlet for their energies.

“I think we were one of the first acts to put out online performances—we already had one out the first weekend of the lockdown. We figured out how to put together edited videos of performances … Some had their own setups or put up home studios,” Mong told the Inquirer.

“When the test kits first became available, we got them. And once we got our negative results we would ask each other out to rehearse together … so we could gather in one room,” he added.

Their online efforts did keep them sane. “It was for my sanity, to stay connected,” Raymund said. “Survival more than commerce.”

“Shows on Facebook Live eventually became popular, but I think we were a little bit ahead of the curve in that regard. It was also for my own sanity. Although we couldn’t be together physically, it was still good we were able to perform,” Diego said.

But with the recent easing of health restrictions, the live music scene has started showing signs of life. And the group couldn’t be more thrilled. Whether it’s a big event, like its recently announced US tour in November, or an intimate one in a cramped bar, the fire, it said, will always be there.

“We hadn’t played in a long while, but our drive to play for an audience never went away. The love for performing in front of fans is enough motivation, even if it’s just in a small club like Saguijo,” Diego related. “My favorite aspect of playing live is the communion with the audience.”

“We’re excited to see that the live scene is coming back. We have been playing almost weekly since November,” Raymund said.

When it comes to crafting an album or selecting a lead single, the band doesn’t just consider what it thinks the listeners will like. An equally important question is this: “Will we enjoy playing these songs?” That’s exactly how the tracklist of Sandwich’s latest EP, “No Goodbyes,” came to be.

“We wrote about 20 to 30 songs. We rehearsed them and played them. And from that group of songs, a handful of them emerged as our favorites. ‘Ito ’yung mga masarap tugtugin live,’ we thought,’” Raymund related.

“We never really second guess ourselves. We write a song that we want to play at a given moment, or with each other on stage. That’s how we choose the stuff we make. Our singles are usually the songs we want to perform live,” Myrene said.

“We understand prioritizing the listeners’ preference before ours. But the thing is, if the songs aren’t close to your heart, you won’t end up performing them at all,” Diego pointed out.

Written in a beach house in Batangas months prior to the pandemic, “No Goodbyes” is a five-track collection that “offers personal introspection and social commentary,” like the lead single “Buhol Buhol,” which was inspired by the draining, jumbled mess that is Metro Manila traffic. Other tracks include “Curtains” and “Negatives.”

In anticipation of their 25th anniversary next year, Sandwich is currently exploring new live show formats and considering doing a documentary on their musical journey.

“We’re more than just a band. We’re a family. Every new thing we discover is going to be part of that. We’re thankful that we’re still together,” Raymund said.