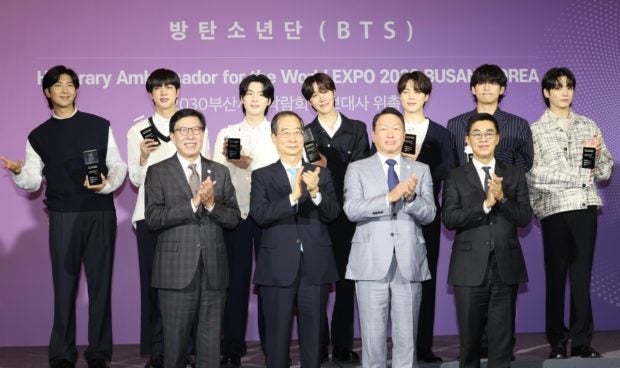 Members of K-pop phenomenon BTS have officially embarked on their roles as honorary ambassadors for South Korea‘s bid to host the 2030 World Expo in Busan.

The ceremony was attended by BTS and the committee‘s co-chairs: Prime Minister Han Duck-soo, SK Group chairman Chey Tae-won (who doubles as chairman of the Korea Chamber of Commerce and Industry), Busan mayor Park Heong-joon and Hybe CEO Park Ji-won.

During the ceremony, BTS was presented with an appointment plaque, and the band’s leader RM delivered a speech on behalf of the seven members:

“It‘s a true honor that BTS has been appointed as ambassadors for the 2030 Busan World Expo. We will do our best to make the bid successful. Starting with the global concert in Busan set for October, we will strive earnestly to support the bidding and contribute to spreading South Korea’s beautiful culture around the world. Again, we ask for everyone‘s love, attention and support for the Expo.”

The representative members of the bidding committee also shared words of acknowledgment for the K-pop super-band joining the bidding rally.

During the ceremony, SK Group chairman Chey noted how fans from 197 countries around the world had watched the act’s online concert last year, a number larger than the 170 members countries of BIE. He also expressed excitement about the K-pop group‘s role as ambassadors.

“There’s a BTS song titled ‘Attack on Bangtan.’ I think it was released when they were a rookie band, and the lyrics were about how BTS will march forward. I‘m also looking forward to seeing how the Busan Expo will unfold with BTS marching forward in unison,” Chey said.

“With BTS alongside us, from the bidding to the hosting of the event, we can make Busan Expo into a festival on ’Fire‘ for people all over the world. I expect something like ’Dynamite.’ Let’s ‘light it up like dynamite,’” Prime Minister Han said, making references to the band‘s hit songs “Fire” and “Dynamite.”

Hoping to add star power to the port city’s 2030 Expo bid, Hybe signed a memorandum on June 24 with the Busan city government to support and cooperate in bidding efforts, whereby BTS would be ambassadors.

Taking up the ambassadorial roles, the K-pop group is poised to participate in various promotional activities at home and abroad. BTS will hold a global concert in the port city in October, conduct negotiation activities with the voting members of Bureau International des Expositions and promote Busan as a candidate at the BIE General Assembly. BIE is the intergovernmental body overseeing the World Expo.

The World Expo is considered one of the largest international festivals, on par with the World Cup and Olympics. The event takes place every five years and attracts millions of visitors to the host city during its six-month duration. According to the South Korean government, hosting a World Expo is estimated to create economic activity worth 61 trillion won ($46.4 billion).

Busan, the second largest city in South Korea, is among three competitors vying to host the 2030 Expo. Its rivals are the Saudi Arabian capital Riyadh and the Italian capital Rome. The host nation will be decided in November 2023 in a vote among the 170 BIE member countries.

Busan is also the home city to two of the members, Jimin and Jungkook. Mayor Park noted this as he shared gratitude for BTS and Hybe, saying, “We weren‘t sure if they would take up the role of ambassadors as they are such huge global stars, but CEO Park was very willing. Park visited Busan with the chairman, Bang Si-hyuk, and understood our objectives for their appointment as ambassadors, and we’re grateful for this.”

About the upcoming concert in Busan, the mayor said, “We are aware that the band is preparing for a gig bigger than their LA concert. We‘re hoping billions of BTS fans will cheer for Busan Expo.”

Meanwhile, BTS’ appointment as honorary ambassadors for the 2030 Busan World Expo marks the K-pop act‘s first official group activity since announcing a hiatus on June 14 for the members to focus on solo projects.

If held as planned, the Busan gig is expected to be BTS’ first concert in Korea since playing in Seoul as part of its “Permission to Dance On Stage” world tour series in March. JB