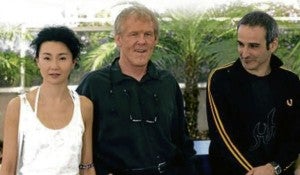 At the opening of the Citi-Rustan’s French Film Festival recently, French Ambassador Gilles Garachon was the first to point out: Olivier Assayas has a profound and passionate connection to Asia.

The French filmmaker—whose works were featured in a retrospective during the event held at the Shangri-La Plaza Mall—didn’t think twice when he was invited to visit Manila.

Assayas is one of the first Western journalists/filmmakers to draw global attention to Asian cinema. A first-time visitor to the country, he said he had always been interested in Philippine cinema as well.

As a journalist in the 1980s, he met the late National Artist Lino Brocka, Assayas told the Inquirer. “I interviewed Brocka,” he recounted. “I’ve always admired his work. In the 1990s, after his death, I wanted to present his films ‘Jaguar’ and ‘Maynila sa mga Kuko ng Liwanag’ at the Toronto Film Festival. But the organizers couldn’t find good 35mm copies of his movies. I heard now there are efforts to preserve your country’s films.”

Assayas described Brocka as “an extraordinary filmmaker and a likeable fellow.”

He had seen Brillante Mendoza’s “Serbis” and “Kinatay” in France, and finally met the Cannes-winning Filipino director here. “I hope to catch Brillante’s new film ‘Captive’ when it is released in Paris (in September),” he said. (Assayas had left Manila when “Captive” was screened at the French fest on June 9.) 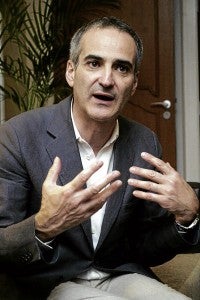 At a welcome dinner held at the ambassador’s residence, Assayas got to chat with Mendoza and fellow directors Tikoy Aguiluz, Adolfo Alix Jr., Raya Martin and Ed Lejano. The Cultural Center of the Philippines organized a luncheon-interaction with other Filipino filmmakers.

His strongest connection to Asian cinema remains to be Chinese actress Maggie Cheung, his former wife and his lead actress in two landmark films, “Irma Vep” and “Clean” (both included in the Shangri-La retrospective).

The 1996 film “Irma Vep” was a turning point for both Assayas and Cheung. “It was my first time to direct a big star,” he recalled. “It was her first time to do my kind of experimental movie as well.”

With limited resources, he shot it “guerrilla” style. “We were on an adrenalin high. Maggie had never acted in English before that film and it opened her up to a different way of filmmaking as well.”

Although they divorced in 2001, they remained friends. When they collaborated again on “Clean” in 2004, he wrote it with Maggie in mind. She won a Cannes best actress award for the movie.

“We haven’t seen each other of late,” he said candidly. “She has moved to Beijing. It’s a pity that she doesn’t make movies as often as before. She’s one of today’s best actresses.”

In the 2000 film “Les Destinées Sentimentales” (also included in the retro), he worked with Isabelle Huppert, Mendoza’s star in “Captive.”

Assayas was led to filmmaking not necessarily by his father (filmmaker, Jacques Rémy), but by a love for words and the visual arts. “I studied painting and became a writer for (the influential film magazine) Cahiers du Cinéma. Filmmaking combines two of my passions,” he pointed out. During his stint in Cahiers in the 1980s that he championed Asian film.

In 1984, he masterminded an entire issue of Cahiers that showcased Chinese filmmakers King Hu, Liu Jialiang, Chu Yuan and Chang-Cheh, among others.

When he traveled to Asia in the 1980s, he met and befriended acclaimed Taiwanese New Wave filmmakers Hou Hsiao-hsien and Edward Yang, and cinematographer Christopher Doyle, who frequently worked with Wong Kar-wai.

“I admired Hou’s works and wanted the whole world to recognize his talent,” Assayas said. In 1997, he made the documentary “HHH, Portrait of Hou Hsiao-hsien.”

“I didn’t approach the docu as a movie critic or film historian. I presented it from the point of view of a friend. He is one of the greatest filmmakers in the world,” Assayas said. “HHH” was part of the Manila retro as well.

Another highlight of his Manila trip was a master class at the University of the Philippines Film Institute in Diliman.

He related: “The students asked smart, sharp questions. I was happy that they had seen my films, including my latest five-hour work, ‘Carlos.’”

He summed up his fascination with Asia: “I’ve learned a lot from Asian cinema and culture. It taught me other ways of making movies and connecting with other cultures.”