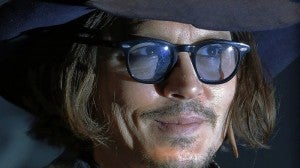 LOS ANGELES—Johnny Depp and his longtime French girlfriend Vanessa Paradis have agreed to separate “amicably,” a publicist for the Hollywood “A” lister said Tuesday.

The “Pirates of the Caribbean” star and Gallic singer and actress have been together for 14 years, and rumors of trouble have been circulating for some time, leading to Paradis denying a split in January.

The publicist, Robin Baum, confirmed the statement to AFP.

The couple, who divide their time between France and the United States, have two children aged nine and 13 but have never married.

In January, Paradis flatly denied a split, telling French Canal+ television station: “The rumor is false, of course it is false .. It’s a rumor that could really damage my family,” she added.