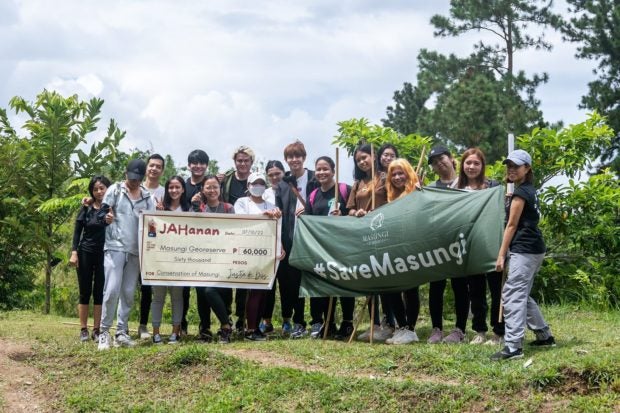 SB19’s Justin celebrated his 24th birthday in the company of fans as they participated in a tree-planting event and made a monetary donation to the Masungi Georeserve in Rizal.

(We do not have just fun. We enjoy, build a happy community, but at the same time we help the environment.)

Aside from this, Justin and his fans also made a “generous donation” for the rangers and forest restoration efforts of Masungi Georeserve. It appears they made a P60,000 donation, as they can be seen holding a big check with the said amount addressed to the reserve.

LOOK: SB19’s youngest member Justin celebrated his birthday with his fans by planting trees at the Legacy Trail. Aside from from planting Narra saplings at the site, they also made a generous donation for our rangers and forest restoration efforts. (1/3) #SaveMasungi pic.twitter.com/xBhh9tJw1O

Last March 2022, fans of SB19, A'TIN, helped reach our target signatories for the #SaveMasungi campaign. They are part of our cause and their support always encourages us to continue our work despite the challenges. (3/3) pic.twitter.com/Tl5Acp8whg

WATCH: Justin's message of support to Masungi and our forest rangers.

Justin is part of the P-pop group SB19, alongside fellow members Pablo, Stell, Ken and Josh. They are known for the songs “MAPA,” “Bazinga” and “What?”, among others.

The group is set to be one of the performers in the upcoming Binibining Pilipinas coronation night. They also recently did their own rendition of the pageant’s theme song.  /ra