MANILA, Philippines — For decades, beauty contest afficionados have associated the phrase “lovely, pretty, captivating” and the question “Where did you get those lovely eyes?” to the Binibining Pilipinas pageant, these being lyrics to the iconic theme song of this renowned beauty pageant.

But for the pageant’s 2022 edition, spectators will be treated to a modern take on the anthem, as interpreted by the wildly popular P-pop act SB19 composed of Pablo, Stell, Josh, Ken and Justin.

The quintet’s take on the Bb. Pilipinas theme song debuted during the press presentation of the 40 delegates held at the grand ballroom of Novotel Manila Araneta City in Quezon City on July 5, where part of the recording was played before the program’s conclusion.

This year’s edition of the Bb. Pilipinas pageant has adopted a P-pop flavor in many of its previous activities. The press presentation also had a live performance from the internationally-known female quartet 4th Impact, while male group 1stOne and girl squad Dione livened up the talent competition held earlier at the New Frontier Theater. 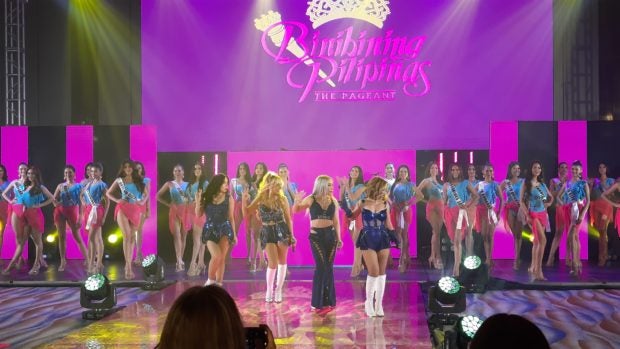 The delegates also underwent a P-pop dance workshop at the Addlib dance studio, which also taught them stage confidence.

Produced by Stellar Social Events Co. Inc., composed of the team behind the pageant’s production since 2011, the 2022 Bb. Pilipinas grand coronation night will be staged at the Smart Araneta Coliseum at the Araneta City in Quezon City on July 31, and will be simulcast on the Kapamilya Channel, the Metro Channel, TV5 and A2Z.

The pageant will also be seen overseas via the iWantTFC app and the pageant’s official YouTube channel.

Two more grand events are scheduled before the finals. The national costume show will be held at the New Frontier Theater on July 16, while the much-anticipated grand parade of beauties will take place around the Araneta City on July 23. JB