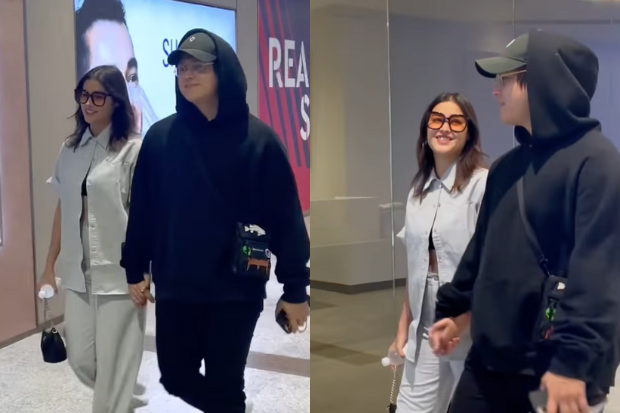 Liza Soberano and Enrique Gil’s fans can now take a sigh of relief as the couple put an end to speculations that they broke up after they were seen holding hands at a beauty clinic.

Celebrity doctor Hayden Kho filmed the couple walking with their hands clasped together when they visited Belo Medical Clinic, as seen on Kho’s Instagram page last Monday, July 11. Kho added that Soberano squeezed in the appointment to the clinic despite her busy schedule.

Soberano and Gil, known as the love team LizQuen, appeared to be in a conversation, and the actress was all smiles while talking to her boyfriend.

Fans, particularly on Instagram, expressed happiness over watching Soberano and Gil and expressed how much they missed seeing the couple together.

“Sobrang saya ng puso ko [nang] napanood ko ito (My heart was so happy when I watched this). We miss you LizQuen. Thank you [Doc Hayden] for sharing,” one @_akosibekya said.

“So, hindi totoo na hiwalay na [sila] (So it is not true that they broke up)?” one @cashey_1 asked, along with heart emoji.

Rumors that Soberano and Gil had called it quits circulated online last May, when Gil took a trip to Spain without Soberano. Netizens then started linking Soberano with her fellow actor and now-manager James Reid, who was spotted bonding with her in the United States over the past months.

Soberano’s former manager Ogie Diaz dismissed rumors about the supposed split, also last May. He pointed out that Soberano was supposed to join Gil in his May 8 flight to Spain, but she opted to stay in the Philippines to cast her vote during the May 9 elections. Diaz also denied that there was anything romantic brewing between Soberano and Reid since the actress is in a relationship with Gil.  /ra