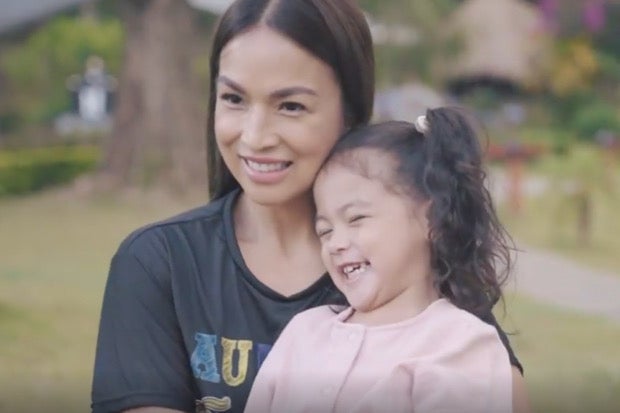 Aubrey Miles and her daughter Rocket. Image: Instagram/@reyesstudiobc via @troymontero

Aubrey Miles recounted when her daughter Rocket was diagnosed with Autism Spectrum Disorder, disclosing that self-blame was what the actress initially felt at the time.

Miles talked about Rocket’s condition with her husband Troy Montero, in an interview with actress-TV host Toni Gonzaga, as seen in a vlog on her YouTube channel yesterday, July 10. Miles and Montero recalled how they felt upon hearing for the first time the doctor’s diagnosis of their daughter.

“Parang we got punched kasi it’s official na nga. Although may feeling na there was really something, but once it’s official, it’s like, ‘Oh wow,'” Montero said. “It took us how long for it to sink in.”

(It felt like we got punched because it was official. Although we already had a feeling that there was really something, once it’s official, it’s like, “Oh wow.” It took us how long for it to sink in.)

Miles then turned emotional after she admitted that the diagnosis was unexpected for her.

“You want to blame ‘yung sarili mo kasi as a mom, parang, ‘Ako ba ‘to?’ (You want to blame yourself as a mom and ask, ‘Is this because of me?’)” Miles stated, after which Gonzaga asked, “You blamed yourself?”

(I thought, “Is this because of me? What did I do? Is it because of our genes? I told myself, “Why? I did not even went on a diet at the time [of my pregnancy].”)

Miles was informed by the doctor that there was no specific cause for Rocket’s condition. The doctor added that there is no cure for it but stressed there is still hope through undergoing therapy.

The couple then credited Rocket for making their family “stronger and closer,” with Miles describing her daughter’s condition as the “ultimate challenge” in their relationship.

“I’m crying because we can say it kasi before parang it was so hard. Sabi ko, ‘Nakakahiya ba ‘yon na baka [kung anong sabihin nila]?'” Miles added. “Now, I’m happy that I’m open and I’m like, ‘You know what? We can do this.'”

(I am crying because we can already say it [in public] because it was so hard before. I told myself, “Is it embarrassing just because people might say something?” Now, I am happy that I am open and I am like, “You know what? We can do this.”)

Miles and Montero first revealed their daughter’s condition last April, stating that they did not immediately share it to the public because they were still educating themselves. Miles later shared Rocket’s progress, with the kid now able to call her “Mama.” JB

Aubrey Miles shares progress of daughter with autism: ‘She just learned to call me mama’