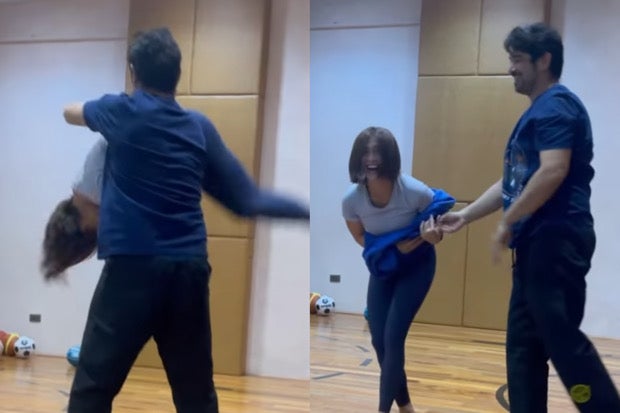 Heaven Peralejo gave a glimpse of behind-the-scenes moments of her upcoming film with actor Ian Veneracion, hinting that “death-defying” stunts are included in the said project.

The actress earlier announced that she would be working on a new project with Veneracion and actor Mon Confiado, who Peralejo described as “talented veterans in the industry.” While no further details were given about the film, Peralejo showed “bloopers” of herself and Veneracion doing some stunts, via her Instagram page yesterday, July 6.

“Ang nagpapaikot nga pala ng mundo ko… LITERALLY!!!!” Peralejo said, referring to Veneracion who lifted and turned her upside down while she screamed. “Buwis buhay all for this film. I can’t wait to share this with you guys!!!!”

(The one who turned my world upside down… Literally! Death-defying [stunts] all for this film. I can’t wait to share this with you guys!)

Peralejo, who appears to have been taken aback by what Veneracion did to her, then laughed it off along with the film production staff.

Meanwhile, Confiado is currently in Baguio for his “film character immersion,” as seen on his Instagram page today, July 7. It was not stated if the trip was for his film with Peralejo and Veneracion.

The film, produced by Rein Entertainment, will be helmed by director Shugo Praico, as per Confiado’s earlier post.  /ra