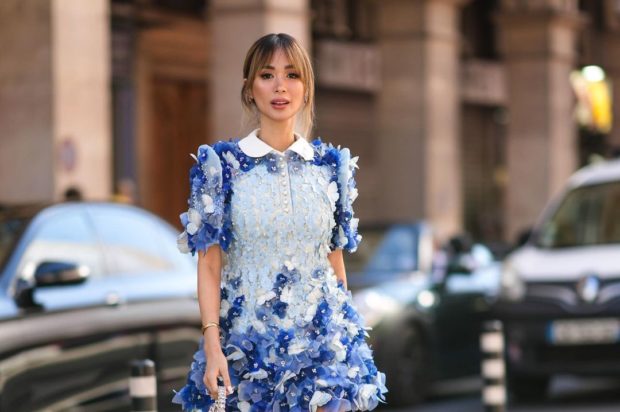 Heart Evangelista highlighted Filipino fashion during her stay in Paris by wearing a modern-day Filipiniana named after the late Sen. Miriam Santiago.

The actress can be seen walking around the streets of Paris in a blue modern-day terno paired with a floral appliqué mini dress, designed by Cheetah Rivera, as seen on her Instagram page yesterday, July 7. The dress was adorned with embroidered butterflies of varying sizes and shades of blue.

“My kind of Filipiniana by my darling [Cheetah Rivera],” Evangelista said.

The Filipiniana dress is called “Santiago,” named after the late senator. It is a “tribute and a celebration of the strength of a Filipina,” as per Rivera’s Instagram page, also yesterday.

“Watch as ‘Santiago’ fly and unfold as worn by the one and only [Heart Evangelista],” she stated.

It can be noted that Evangelista has been open about her close relationship to Santiago and would often describe the late senator as her “second mother.” Santiago even played cupid for the actress and introduced her to her now-husband, Sen. Francis “Chiz” Escudero.

Santiago passed away back in September 2016 after battling cancer. She was 71 years old.

Evangelista is in France for Paris Fashion Week. During her stay in the city, she met South Korean actress Song Hye-kyo at an event for a luxury jewel brand.  /ra

ADVERTISEMENT
Read Next
aespa speaks at UN, calls for action on sustainable development goal
EDITORS' PICK
House energy committee chair Arroyo bats for cheap electricity
Karding damage to infrastructure at P23M
Bongbong Marcos says PH ‘open for business’ with new Clark Airport terminal
Individuals affected by ‘Karding’ now over 157,000
Reignite your passion with the vivo Y35
Newbie gamers are in for a treat with the power-packed feature of vivo Y16
MOST READ
Angelica Panganiban ‘duguan, sugatang mom’ one week into breastfeeding
LPA enters PAR, may develop into tropical depression
Badoy not with Office of the President, NTF-Elcac, under Marcos admin — solon
Charges readied vs gov’t guard with P290-M deposits
Don't miss out on the latest news and information.