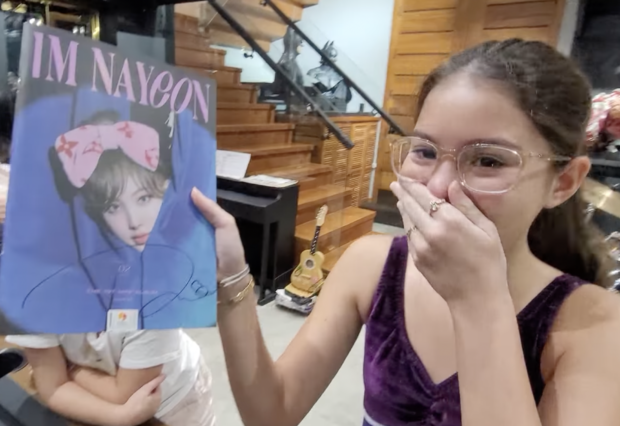 Kendra Kramer could not help but feel ecstatic after receiving a signed album of her favorite K-pop star, Nayeon of the girl group TWICE.

Kendra’s father, Doug Kramer, captured the moment Kendra received her gift, via video on Team Kramer’s Facebook page yesterday, July 4. Kendra can be seen crying tears of joy as she looks at the signed “Im Nayeon” album and her mother, actress Chesca Kramer, laughs in the background.

According to the couple, Kendra made an Instagram Reel video of Nayeon’s song “No Problem” and the album was sent “as a gift.”

“I dubbed the song ‘No Problem’ on my Instagram account. It’s part of her solo album and I’m very happy because she’s my bias in TWICE and I like her a lot,” Kendra told her father in the video.

Kendra gets the surprise of her life!

After doing a Reel and Collab for Nayeon, she gets sent a signed album! She's joyfully crying right now! 😂❤️

Kendra received the album just days after turning into a teenager. She celebrated her 13th birthday late last month.

To mark the milestone, Doug and Chesca gifted Kendra with her first Rolex watch, as seen on the family’s YouTube vlog last Saturday, July 2.

Nayeon is a South Korean singer and a member of TWICE. She released her solo debut album “Im Nayeon” last June 24.

The album debuted at No. 7 on the Billboard Top 200 Albums chart and made Nayeon the first K-Pop soloist to enter the Top 10 of the Billboard 200 chart, as per Soompi yesterday, July 4.

Some of the tracks included in the album are “Pop!”, “No Problem,” “Candyfloss” and “Love Countdown.”  /ra