Kevin Piamonte’s short film “Dog Eaters” (2022) haunts through the persistence of the familiar: the cruelty of place, the violence of the poor against each other and towards an animal, the domestication of animals to serve man’s selfishness, and the ghost eventually created out of a woman who breaks free.

The short film is an adaptation of Leoncio P. Deriada’s 1975 Palanca-winning short story “The Dog Eaters,” written originally as play, “The Dog Eaters of Artiaga Street” and published in The Philippine Free Press in 1971. Piamonte — who also wrote the script as well as earned a FAMAS for directing the 2021 short film “Solo”— keeps Deriada’s stylistic imprints in the portrayal of what becomes of the couple Victor (Nathan J. Sotto ) and Mariana (Sunshine Teodoro), stuck in the poverty of Artiaga Street, its universe of religious conservatism, and the patriarchal culture it breeds. More importantly, the film asks this question: what now?

“Dog Eaters” foregrounds the female body as the site of struggle, and extends the narrative by refusing to settle with melodrama. The film expounds and expands, thus, it comes to a necessary ending that pushes the agenda of female empowerment and emancipation. A group of women applauds Mariana. And in the spectral effects of the political and economic forces of the historical moment that renders people like Victor and Mariana miserable and torn apart, Mariana’s abandonment of Victor and Artiaga Street is a false freedom. Her agency becomes her dislocation. She arrives at a threshold. What are her prospects? 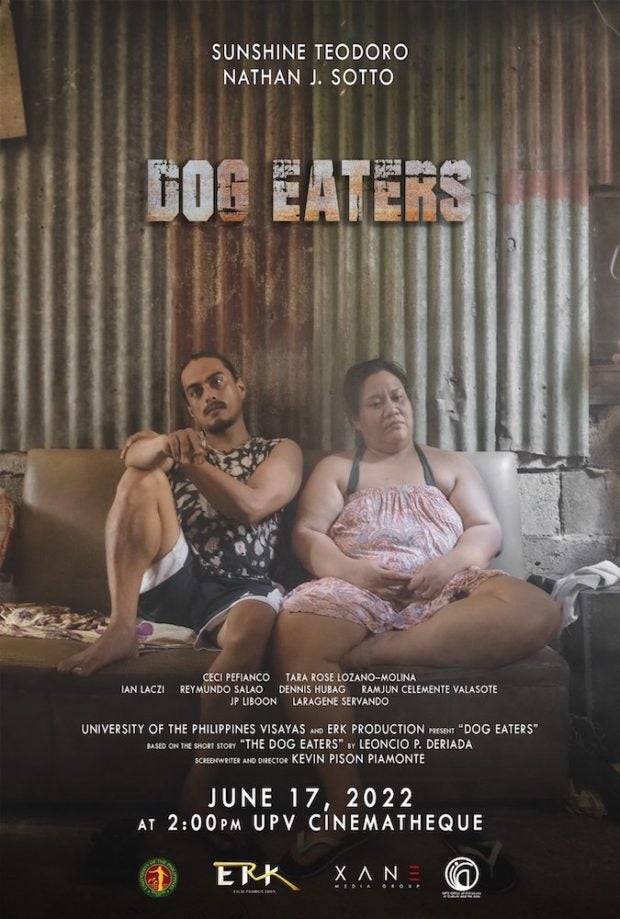 “Dog Eaters.” Image: University of the Philippines in the Visayas

That would be suspicious, if not terrifying, in the absence of progress and modernity. Mariana relies on Elpidia’s (Ceci Pefianco) folk medicine and method in accomplishing abortion. This is suggestive of the recuperative power of romantic nostalgia on indigenous knowledge and ways, as well as a critique of the Catholic religion and patriarchy. The absence of modern science and access to healthcare and facility for a case like Mariana unsettles the triumphalist ending. Her vehicle, a traysikad, is also noteworthy as her mode of transportation to “elsewhere” and a channel to transformation into her aspirational self. It reiterates Filipino ingenuity and resilience, and signifies the slow and uneven development in a dog-eat-dog world while manifesting as anxieties, eating up Victor and Mariana alive. There is also Ramir the dog, Victor’s alter ego and trope of primitivism, the cannibal culture.

“Dog Eaters” compels us to rethink our prevailing assumptions in light of obscene disparities in a country grappling with globalization. It drives us to pay attention to the following: the interplay of not-readily-seen powers that cause characters like Victor and Mariana to become victims; the intersectionality of class and gender; and the monstrosity of poverty. This is the universality and enduring relevance of Deriada’s work. Piamonte’s brilliance is in his acknowledgment and humility; leaning on the strength of dialogue, he let the original text speak in the vocabulary of light and shadow, natural soundscape and staging. In “Dog Eaters” as this film, we hear Deriada, we see Piamonte, and we face our rage and resistance against our collective nightmare of disposability.

It is equally worth mentioning that “Dog Eaters” benefits from skillful editing and remarkable acting performances. Sotto and Teodoro are convincing both as individual characters and as a husband-and-wife tandem. Teodoro, a native Kinaray-a speaker, handles the character of Mariana with emotional restraint, conveyed through her masterful tonal delivery of Hiligaynon. Pefianco’s vocal prowess makes Elpidia’s singular moment memorable. So is Tara Lozano Molina’s appearance as a neighbor. Produced by ERK Film Production and University of the Philippines in the Visayas, “Dog Eaters” is every frame a community care work, a thoughtful tribute filled with meanings and insights for different generations of viewers. JB

2 PH films win in Houston, another selected for Cannes