Chris Hemsworth on his butt exposure in 'Thor: Love and Thunder': 'A dream of mine' | Inquirer Entertainment 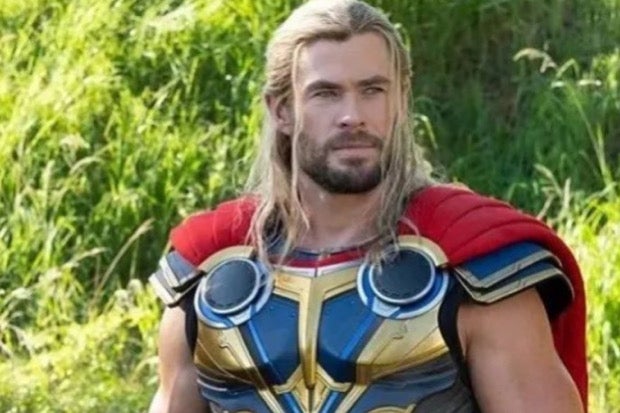 Chris Hemsworth ticked an item off his bucket list as he fulfilled his “dream” of exposing his butt in the upcoming Marvel film “Thor: Love and Thunder.”

In a scene in the official trailer released by Marvel, Hemsworth, who plays the character of Thor, can be seen with his butt exposed after Zeus (Russell Crowe) “flicked” to take off Thor’s disguise. The trailer, as released in Marvel Entertainment’s YouTube channel, blurred the said body part.

Hemsworth spoke about how he prepared for the scene, disclosing that going butt-naked was actually one of his goals, as per an exclusive interview with Variety for the film’s premiere night last Saturday, June 25.

“I did a lot of everything. It was kind of 10 years in the making, you know? It was a dream of mine,” the Australian actor said. “The first time I played Thor, I took my shirt off and I thought, ‘You know what’s [going to] sweeten this? A decade from now, it’s all [going to] come off.”

Hemsworth then pointed out that although it was not his first time to have done it, this particular exposure is apparently a whole different experience for him.

“I had that out in ‘Rush’ many years ago,” Hemsworth added, referring to his 2013 film. “In a Marvel film, it was a very large screen, it was a very big pair of cheeks, and, I don’t know, I had seen it before.”

Hemsworth also talked about his co-star Natalie Portman after he was asked how he felt upon seeing the actress as Mighty Thor for the first time.

“Intimidating,” he answered. “A little stab to the ego but I quickly got over it and I was in awe of everything she [did] on and off the screen. I’m such a fan.”

Aside from Crowe, Joining Hemsworth and Portman in the cast are Christian Bale and Tessa Thompson, among others. “Thor: Love and Thunder,” the fourth installment in the “Thor” franchise, is directed by Taika Waititi and will premiere in theaters on July 8. JB