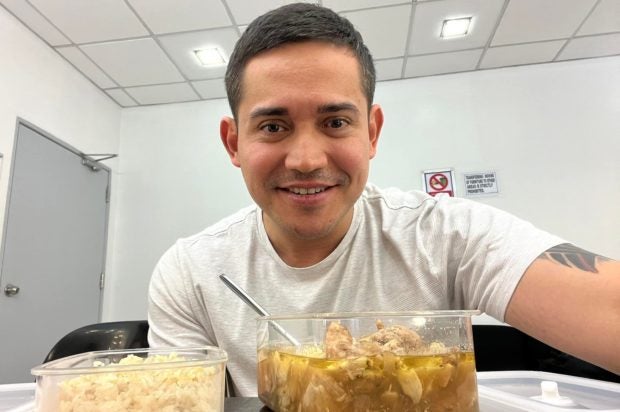 Paolo Contis appears to be unbothered by criticism he received amid getting food from a certain “babikwoooh,” who seemingly is his rumored girlfriend, actress Yen Santos.

The actor showed himself inside what appears to be a dressing room while eating rice and adobo given by “babikwoooh,” as seen on his Facebook page last Sunday, June 26.

(My adobo is delicious. There will even be free bashing later. Thank you babikwoooh.)

While Contis did not say who “babikwoooh” is, it can be noted that he had a now-deleted post in which he showed himself eating kaldereta sent by Santos.

Contis and Santos made headlines last year after they were paired in the film “A Faraway Land” and both unfollowed everyone on Instagram. This led fans to speculate that Santos was the cause of the actor’s split with his partner for six years, actress LJ Reyes.

The breakup between Contis and Reyes was confirmed by Contis’ talent manager Lolit Solis in August 2021. Solis asked the public not to get Santos involved in the issue. She also asserted that the former couple’s separation was a mutual decision, but this was refuted by Reyes in an interview with TV host Boy Abunda.

Contis eventually admitted that he cheated on Reyes, but insisted that Santos was not involved in the breakup. He also confirmed that he spent a day in Baguio City with Santos “as a friend.”

Last November, Santos appeared to  have spent her birthday with Contis as they posted photos that seemed to be taken at the same location.

The actress has not yet publicly addressed speculations about her supposed involvement in the split, as of this writing.

Meanwhile, Reyes is currently in New York with her two children. She has been in the United States since last year and is staying with her family which is based there. According to her, Contis made no efforts to reach out to her after their breakup.  /ra