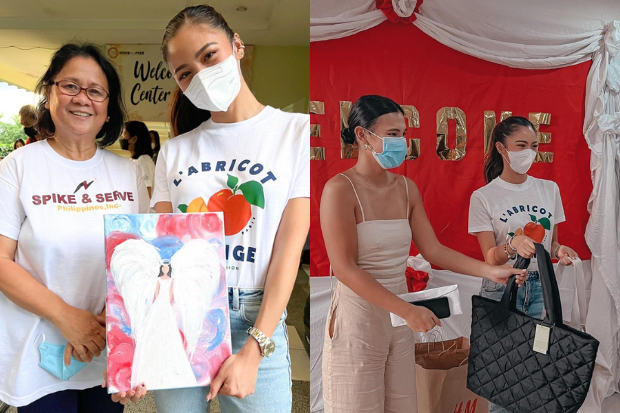 Kim Chiu could not hold back her tears after her visit at a children’s charity, as she expressed hope that the kids she spent time with would grow up to conquer the world.

The actress and “It’s Showtime” host showed moments from her visit to Center of Hope, an organization that provides services to poor and abused children, via her Instagram page last Thursday, June 16. The non-profit organization Spike and Serve Philippines, which helps kids cope with trauma through sports, participated in the event as well.

“On my way here, I was complaining about personal stuff and things. Minor stuff, petty stuff na akala ko mabigat (that I thought were heavy),” she said. “[But] the minute I step foot in this place, hearing their stories, I watch them dance and sing beautiful songs, most especially yung kantang cinompose nila together (the song they composed together)… The song hit me in a way nilalaban ko yung tears ko (that I fought to hold back my tears).”

Chiu then recounted talking to one of the children, who briefly narrated what she had gone through before being in the shelter home. She also narrated how she felt when she was asked to give a message to all of the kids at the event.

“Nakakahiya sa mga bata pero (It was embarrassing to the kids but) I cried. Seeing them strong at their age, seeing them smiling no matter what happened to them before they came in this shelter home. Seeing them being so young, innocent, very hopeful, and most of all, malakas ang tiwala sa Panginoon (with strong faith in the Lord),” she told fans, adding that she felt her problems before coming to the event were not so big as she thought they were.

Chiu recalled telling the kids that they are strong, inspiring, and God will not forget about them. She also believes that they will grow up to be “strong independent women who will conquer the world.”

The actress commended Spike and Serve’s Nicole Tiamzon for her “inspiring” advocacy, along with Cecil Pasis of Center of Hope.

“May this house be blessed with more happiness, hope, love, care and faith in God. Not goodbye, but see you again soon, girls,” Chiu said.

Last April, Chiu marked her 32nd birthday by participating in a charity event for kids and giving away 1,000 food packs. It was also during her birthday celebration that Chiu reunited with all of her four siblings, after nine years of being apart.  /ra