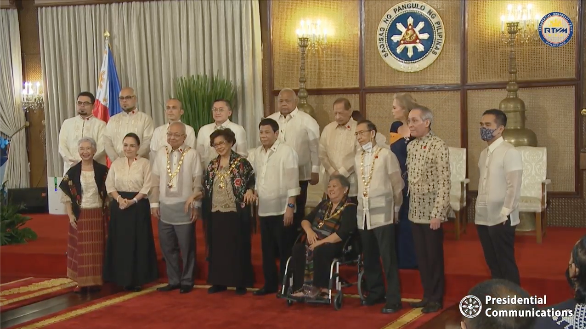 President Rodrigo Duterte confers the Order of National Artists to eight awardees in Philippine culture and the arts on Thursday at the Malacañang Palace. Screengrab from RTVM Facebook page

MANILA, Philippines — President Rodrigo Duterte conferred on Thursday the Order of National Artists on eight personalities in arts and culture, but superstar Nora Aunor was a no-show during the event.

The following personalities were awarded the Order of National Artists in a ceremony at Malacañan Palace:

Aunor, known for her iconic role in the critically-acclaimed “Himala,” among others, was also supposed to receive a national artist award for film, but was not present. She was instead represented by children Ian and Matet de Leon, both also actors.

The Order of National Artists is considered as the highest honor given to Filipinos who have contributed to Philippine culture and the arts.

On top of the title, the national artists received a cash grant, monthly life pension, medical and hospitalization benefits, life insurance coverage, state funeral and burial at the Libingan ng mga Bayani, and a place of honor.

Aside from the conferment, Duterte was scheduled to attend the signing ceremony of the Loan Agreement for the South Commuter Railway Project and the presentation of the second progress report of the National Government-Bangsamoro Government Intergovernmental Relations Body.

The other two events were likewise held at the Palace on Thursday.