Ricky Lee: Portrait of a screenwriter as national artist 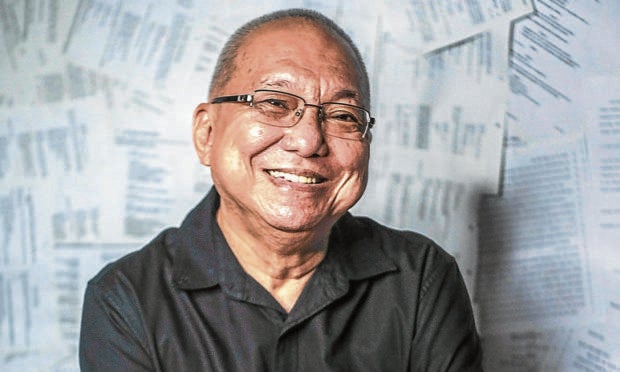 On Friday night, Ricky Lee was having dinner at a Los Baños resort when one of his assistants showed him a screen grab from a TV report: He had been named a member of the Order of National Artists (ONA) together with seven others.

“I had no idea at all,” the 74-year-old screenwriter and novelist said in Filipino over the phone. “That’s just when I found out.”

Lee was answering calls and messages from well-wishers the rest of the night up to the wee hours of the morning.

It was only on his way back to Metro Manila early the next day that it all began to sink in. “Ay! Oo nga (Yes, it’s true),” he told himself.

He is also the author of the definitive screenplay manual, “Trip to Quiapo,” and is considered the country’s unparalleled teacher of the craft, tirelessly giving workshops.

That’s where all the congratulatory messages were coming from — the many screenwriters who had learned from Lee.

“I’m so happy because of the reaction of my former workshoppers — there’s no greater honor than that,” he said.

It seemed like fate that Lee was named National Artist at the same time as two frequent collaborators, Diaz-Abaya, who died in 2012, and Nora Aunor.

“Both are very close friends. So happy for Guy (Aunor) because she’s deserved it and it’s been delayed for a long time, but sad for Marilou that she’s no longer around to receive it,” he said.

While Aunor and Diaz-Abaya were recognized as National Artists for Film and Broadcasting/Broadcast Arts, Lee was named National Artist for Literature, together with poet and critic Dr. Gémino Abad.

But he prefers it this way. “I am happy that I am a National Artist for Literature because I consider screenplays to be literature,” Lee said. “I [also] wrote, plays, fiction, novels, teleplays, so all of that is part of literature.”

As a novelist, he has written two bestsellers, “Para Kay B” and “Si Amapola sa 65 na Kabanata.”

“If you ask me, the real honor is for my novels to be read by millions and millions of Filipinos, but that is difficult to achieve,” he said, although that hasn’t slowed him down.

“I really work at it. I go to schools, give talks and seminars, respond to comments on Facebook, I write dedications to those who buy my books because I want to go to my readers so my readership will grow. If they grow and grow, that is the real honor.”

The novel is special to him, as movies are highly collaborative works.

“When someone who’s read my novels approaches me, it’s more intimate. It’s totally me, all the good and bad things. So, when someone embraces what I wrote, it’s very personal,” Lee said.

He has just finished the first draft of the sequel to “Para Kay B”—tentatively titled “Lahat ng B”—which he hopes to publish this year.

As it has been his habit, he works on several projects at the same time (“Maligalig akong tao [I’m restless]. I cannot stay focused on one thing”).

He has also finished three scripts and started work on a fourth novel. He is even working on “Trip to Quiapo” 2, which, like all his books, he will publish on his own.

‘I wanted to do komiks’

“I want full control, marketing, promotion, even the price so students can afford them.”

But that will change, because University of Santo Tomas Publishing House will be collecting his screenplays, beginning with two volumes, curated and annotated by the author himself.

“At the age of 5, I started reading komiks. They were the first thing that made me interested in stories and storytelling,” he said of his childhood in Daet, Camarines Norte province.

“I wanted to do komiks. Before I wrote Amapola as a novel, I tried doing it as komiks. I read books about doing comic books, and then I realized I didn’t know how to do it. So I wrote it as a novel. But I met Manix, and it got [me] turned [on to] komiks, so I still achieved my dream.”

Since then, other artists have approached him offering to adapt his work, saying his screenplays could be made into komiks as well.

The bespectacled Lee is one of the most amiable, genuinely soft-spoken people you will meet. He recalls the time when the idea of being approached for an autograph terrified him.

But part of the benefits of being named a National Artist is that you will be introduced as such on every occasion you attend.

If it means more people will read him, the shyness is something he is willing to overcome.

He will also receive various monetary benefits. “I’m not good with money. I’m still renting. I have finally paid off the car. I don’t have any savings or property. Most writers are bad with money,” Lee said.

But he does have a plea for other artists: “I wish there would be more deserving National Artists without reducing the benefits. Wag tayong magmaramot sa (Let’s not be stingy to) artists. They are so generous, giving all their heart, soul, and time. I hope we can be more generous with them.”

These realities concerning the artist have been integral elements in Lee’s works—just like his political leanings.

In 1974, two years into martial law, Lee was detained for a year. It is a bit ironic that he will be honored as National Artist in the same year that a Marcos will be inaugurated as president. But Lee is sanguine about this.

The same issues will be present in his work. “I think it’s inevitable. I’m not a rah-rah person. Look at ‘Moral,’ it’s political, but it’s not in your face. My beliefs will continue to progress, hopefully not regress. The social issues [are] attached to them because they are attached to me and to my characters. It’s inevitable. Like in ‘Para kay B,’ all my stories are social and political,” he said.

He was still at work, doing what he always does, amid the congratulations for his latest honor.

“I started doing notes for the new novel. … If anything, it’s an impetus to work more.”