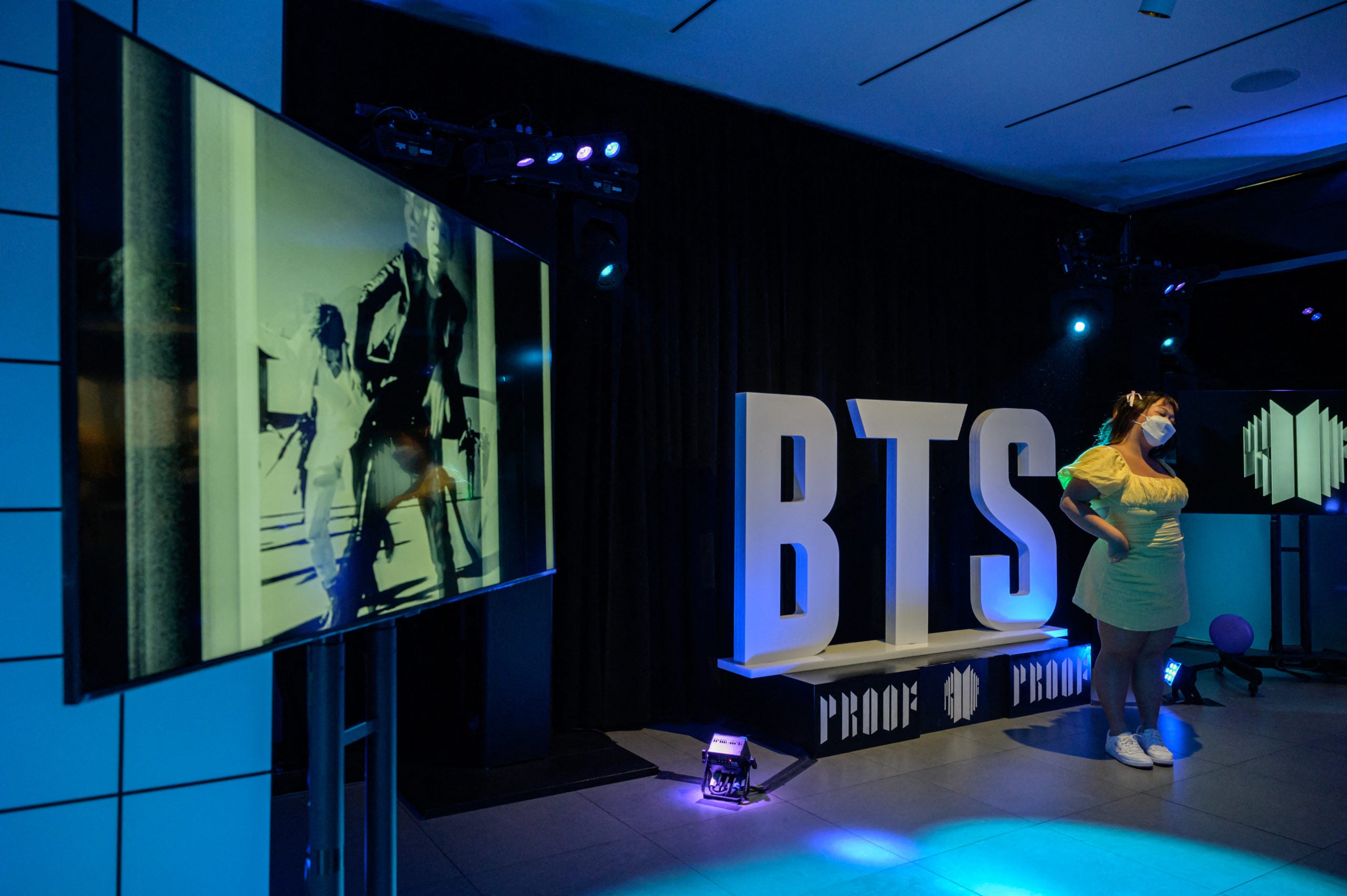 K-pop fans visit a BTS pop-up store in New York on June 15, 2022. – During a candid YouTube video showing them eating dinner while chatting in Korean, K-pop megastars BTS dropped a bombshell announcement on their global fans: the supergroup were taking a break.
Their record label quickly clarified that the megastars would still work together, but the entertainers’ emotional pleas for time off to focus on solo projects quickly won fan support online. (Photo by Ed JONES / AFP)

NEW YORK — The announcement by pop group BTS that they were taking a break saw their label’s stock price quickly plunge, but in New York, fans of the world’s biggest band took a more philosophical approach.

“They’ve reassured their fans that they’ll always be a group, no matter what they do,” said 18-year-old Caroline. “I know that their passion is making music together. So no, I’m not worried.”

About to enter the group’s pop-up shop in lower Manhattan — which opened last week on the occasion of their anthology album’s release — Caroline told AFP she felt “heartbroken” when she heard the bombshell news that the septet would be spending time apart to focus on solo work and finding time to grow as individuals.

Inside the nightclub-esque pop-up, fans can order exclusive apparel or take a photo in front of three large white “B-T-S” letters, with the band’s music providing a soundtrack.

“I’ll always support them individually or together,” Caroline said, adding that the group has taken short breaks before.

For Elin, a 17-year-old from Norway visiting New York with her sister, the premier K-pop act has been “a huge part of my life.”

“I started knowing them when I was going through… a hard time,” she said. “I was dealing with a lot of stuff and then, you know, I discovered them, the music and it really helped me a lot.”

The seven men who soared to fame — producing billions of dollars for South Korea’s economy along the way — have been frank on issues including self-esteem and anti-racism, speaking before the United Nations in 2018, and more recently at Joe Biden’s White House.

“I’m very happy that they’re taking time doing what they want… taking time to just focus on themselves,” said Elin.

BTS is the first South Korean act to dominate the top US singles chart with their first all English-language hit “Dynamite.”

They’ve since reigned over Billboard’s Hot 100 with songs including “Butter” and “Permission to Dance.”

BTS has also scored two Grammy nominations, though the group has yet to win the prestigious award.

“I’m thankful there are still barriers and challenges we can try to work to overcome,” group member Suga said after their second loss.

In April, the band brought together 200,000 people over four show dates in Las Vegas. A month earlier, a livestream of their concert in Seoul was shown in American cinemas — and reached third in the box office.

Jorge Ponce, who came to the Manhattan pop-up with his wife and two children, was at the Las Vegas show.

“BTS has a wide range of reaching out to people — don’t matter their age, or what they’re going through,” Ponce said.

“They always connect with… the ARMY,” the 43-year-old continued, referring to the group’s super fandom.