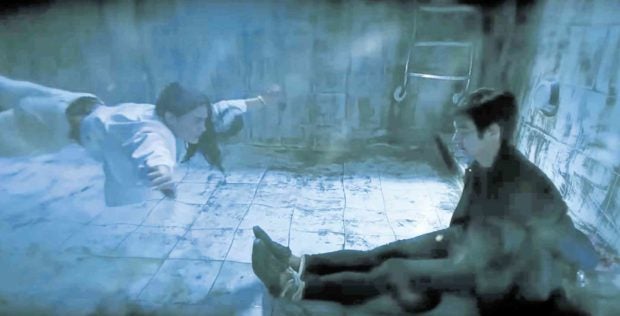 The iconic underwater scene in “Flower of Evil”

Actor Piolo Pascual, who plays a character “trying to hide his dark past” in the local adaptation of the Korean suspense-drama series “Flower of Evil,” said he was so into his role that he would experience nightmares while taping for the series.

During the six months that he and leading lady Lovi Poe worked on the program, Piolo said he would also suffer from sleepless nights “because he is too much of a negative and complicated character.”

This was why, as soon as they were finally allowed to step out of their taping bubble, Piolo tried to shake off being Jacob del Rosario, “but with great effort,” he told Inquirer Entertainment.

“I distanced myself from work and from everybody. I went to Coron [in Palawan]. I also went to Bicol,” said Piolo, who had just gotten home from a trip to Boracay before attending the media junket for “Flower of Evil.”

“It was hard, but it was a fun ride being with Lovi and with everyone on the set. Everyone just wanted to do better. When you see a team of dedicated members, you’d feel ashamed not to give your best, too. You’d challenge yourself to do something you haven’t done before,” Piolo pointed out.

Lovi admitted to also having difficulty shaking off her character, detective Iris Castillo-del Rosario, Jacob’s wife. In fact, Lovi said she got so “affected” when she saw that Piolo had already cut his hair short before the media junket.

Lovi explained: “Weirdly, when I saw him a while ago, I didn’t recognize him. He looks so different. The hair he wore as my husband was no longer there, and I was like, ‘What happened?’ He looks great with his new hair, it’s just that I’m not used to it.

“It’s hard to shake it off because I’ve been that character for six months. That’s what happens when you’re locked in and you’re portraying this character every day,” said Lovi, adding that they have only wrapped up the shoot two weeks ago. “To shake her off, I went straight back to work while trying to pretend nothing happened.”

Inquirer Entertainment then asked Piolo to recall his experience shooting the iconic “Flower of Evil” scene wherein a shackled Jacob is trapped at the bottom of a deep pool and Iris tries to save him.

While submerged in water, Piolo said he “tried to count sheep. If not, I’d panic and feel claustrophobic. Imagine your feet being tied up, you can’t move for real, and you’re underwater for a couple of minutes. You will really freak out and hyperventilate if you don’t relax.” 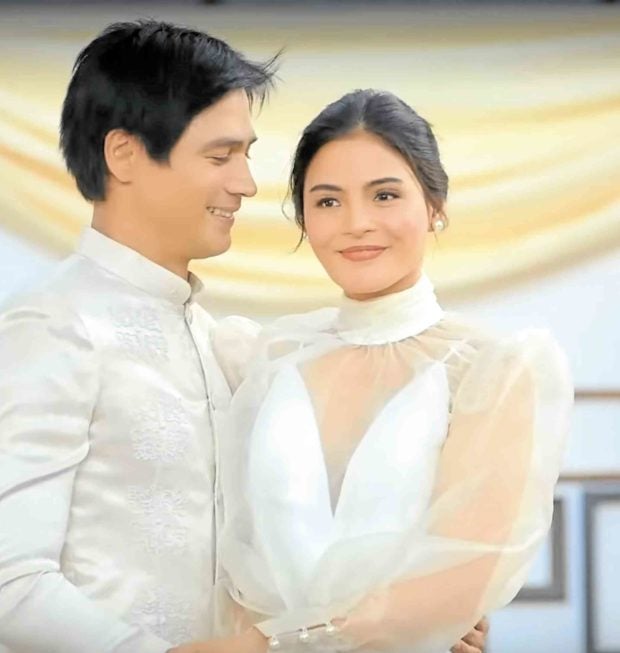 He continued: “Actually, it was harder for Lovi because she would have to open her eyes while in the water. Chlorine really hurts the eyes. Then, she would have to swim back up. She has to do all these and show emotions at the same time. I was there with my eyes closed. That’s why I was counting sheep.”

Lovi added: “I had to save him by cutting all the ties around him and taking him out of the water. I’m very paranoid under water, so what I did was I swam so fast. I wanted to get it over and done with. It was difficult but fun.”

How can this scary experience be something “fun,” we asked Lovi. “It’s different. It gives you a different kind of fulfillment knowing that you were able to do it,” she said. “That scene is iconic. I remember when they offered ‘Flower of Evil’ to me, the first thing that came to mind was that scene. I imagined Piolo there and me diving in.

“I was so pumped up. Everyone was like, ‘How are you? Are you feeling cold?’ I said, ‘No, I’m OK,’” Lovi recalled. “I was surprised that Piolo could sleep in between takes even when he was drenched in water. This is actually one of his talents! He just came up from the pool, covered himself with a thermal blanket, and actually went to sleep! I was there taking selfies, and when I turned my back, I saw that he was actually asleep!”

Meanwhile, Piolo’s supporters, who are used to seeing him play kind and good-natured characters, will see their idol in a very different light in the series. Piolo said he agreed to play Jacob because he “got so bored” as he tried to “get out of pandemic life.”

“When it was pitched to me, I didn’t think twice and said ‘yes’ immediately. I found it really interesting. This was until I saw the Korean version. That’s when I questioned myself for agreeing to do it, that’s when I realized how hard it was going to be for me,” he said.

“Flower of Evil,” codirected by Darnel Joy Villaflor and Richard Ibasco Arellano, will premiere on June 25 on the Kapamilya Channel. It is a coproduction of Dreamscape Entertainment, the Hong Kong-based streaming platform Viu, and the South Korean entertainment and mass media company CJ E&M.