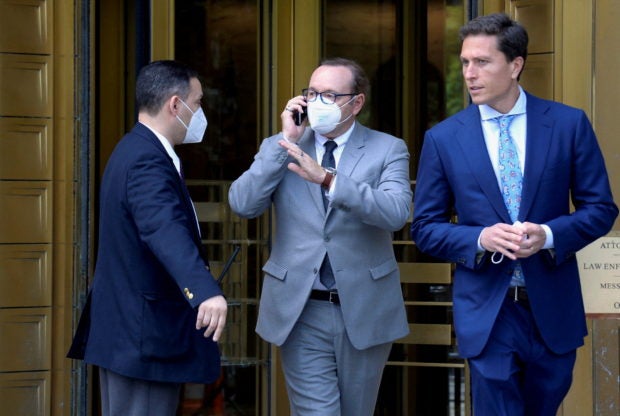 Actor Kevin Spacey leaves Federal District court after a hearing on a sex assault lawsuit against him in the Manhattan borough of New York City, New York, May 26, 2022. Image: Reuters/Jefferson Siegel

NEW YORK—A federal judge on Monday rejected Kevin Spacey’s bid to dismiss a civil lawsuit in which fellow actor Anthony Rapp accused the Oscar winner of making an unwanted sexual advance during a party at Spacey’s Manhattan home in 1986, when Rapp was 14.

US District Judge Lewis Kaplan in Manhattan said there was a genuine factual dispute about whether the now 62-year-old Spacey forcibly touched Rapp’s “intimate parts” to gratify his own sexual desire.

Kaplan said Rapp, 50, who is seeking compensatory and punitive damages, can pursue claims of battery and intentional infliction of emotional distress. The judge dismissed an assault claim because Rapp brought it too late.

A lawyer for Spacey did not immediately respond to requests for comment. Spacey has in court papers “categorically” denied Rapp’s accusations.

Once among Hollywood’s biggest stars, Spacey fell from grace after Rapp accused him of misconduct in October 2017, and more accusers came forward.

Last month, British authorities authorized criminal charges against Spacey for alleged sexual assaults against three men between 2005 and 2013. Spacey could formally face the charges if he entered England or Wales.

The actor’s awards have included Oscars in 2000 for best actor in “American Beauty” and in 1996 for best supporting actor in “The Usual Suspects.” He also won a Tony in 1991 for best featured actor in a play in Neil Simon’s “Lost in Yonkers.”

Netflix dropped Spacey from his starring role in “House of Cards” after accusations began surfacing, and the series finished without him.

In the alleged 1986 encounter, Spacey grabbed Rapp’s buttocks, lifted him onto a bed and laid on him before Rapp “wriggled out,” court papers say.

Rapp has said under oath there was no kissing, undressing, reaching under clothes, sexualized statements or innuendo, and the encounter lasted no more than two minutes.

He sued Spacey in September 2020 and invoked the Child Victims Act, a New York law giving accusers a since-expired window to sue over abuses from decades earlier. AP

Read Next
Diego Loyzaga confirms dating ex-PBB housemate Franki Russell
EDITORS' PICK
The Best Tech Gifts For The 2022 Holidays
Is it safe to talk politics again at family gatherings? ‘The Reconciliation Dinner’ shows us what that’s like
EDITORIAL: To a bike-friendly future
House energy committee chair Arroyo bats for cheap electricity
vivo’s coming to town to grant wishes with more holiday promos
Pagasa: Warm, sunny Sunday in most parts of PH
MOST READ
LOOK: Vhong Navarro transferred to BJMP detention facility in Taguig
The Elephant Man in the Senate
Posh village as ‘shabu’ haven
LOOK: Zanjoe Marudo bonds with Ria Atayde, her family
Don't miss out on the latest news and information.