Relationship with Rabiya ‘a blessing,’ not a distraction to Jeric Gonzales’ blossoming career 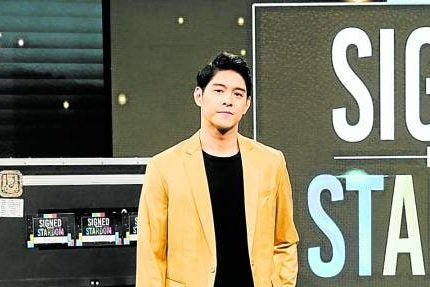 With a career on the upswing and a blossoming love life, 2022 is shaping up to be a “great year” for Jeric Gonzales.

The 29-year-old actor, who recently renewed his contract with Sparkle GMA Artist Center, is part of the upcoming adaptation of the hit South Korean series “Start-Up” with Bea Alonzo and Alden Richards. His performance in the indie film “Broken Blooms” won the Critics Choice award for best actor in an indie at this year’s Mokkho International Film Festival in India, and best actor at the Harlem International Film Festival in New York City.

And these achievements Jeric gets to share with his girlfriend, Miss Universe Philippines 2020 Rabiya Mateo—one of his constant sources of inspiration.

“These are all blessings … She’s a blessing to me. If I was inspired back then, I’m even more inspired now. It feels good knowing that there’s someone who takes care of you, believes in you and pushes you to do your best,” Jeric said in a recent virtual conference.

While some show biz insiders think that being in a romantic relationship can be a distraction for actors trying to make a name in the industry, the opposite is true for Jeric.

“When Rabiya came into my life, I felt more driven to hone my talent, build my career and focus on achieving my goals. I still have a lot of goals. I thought [juggling career and love life] was going to be difficult. But I didn’t feel like I wouldn’t be able to handle it,” he said. “I became even more driven to push myself.”

In his nine years in show biz, this was the first time Jeric publicly announced that he’s dating someone. “For the longest time, wala akong pinapakilala. It’s the first time I admitted to being in a relationship. I couldn’t be more proud to share with people how lucky I am to have her. I’m so happy,” she said.

The two Kapuso talents are “very much in love with each other” and are thrilled about the “things happening in our lives.” Given the chance, Jeric said he would like to work with Rabiya on an acting project.

“We’re excited about the opportunities, the projects that we can work on together. I hope we can do a show or play as her leading man. I feel like that would be fun,” he said. “I’m happy we both signed with GMA 7 at the same time, and I hope that allows us to grow together.”

Jeric related that the first cycle of taping for “Start-Up” had already concluded. “I’m very excited and grateful to GMA for giving me this role. I’m happy because the scenes we have done so far are really good. We incorporated our own culture into this adaptation. And I’m excited for the people to see what we have been working on,” he said.

Winning an acting award was one of Jeric’s longtime dreams. And his triumph in two international film festivals this year, he said, is an affirmation of his hard work.

“It still hasn’t sunk in. I don’t see it as me leveling up. I want to stay grounded and focus on the things I’m working on right now. I know that I’m still not in the level I want to be at when it comes to acting. But I’m thankful my efforts were recognized and that the network’s patience and workshops paid off,” he said.

“It feels satisfying that I was able to give my best in the movie,” Jeric said of “Broken Blooms,” which is directed by Louie Ignacio. “The awards are just bonuses.”

Asked what he thought is the measure of stardom, Jeric said it’s longevity. “I see stardom as having longevity. Staying in show biz is not easy. There are a lot of actors coming in. If you have been in it for a while, you must think of ways to reinvent yourself and think of things you have yet to show people,” he said.

“I have been here for nine years now, so every now and then, I make sure that I discover new passions and show people something new,” he added. “I think that’s the measure of stardom.”