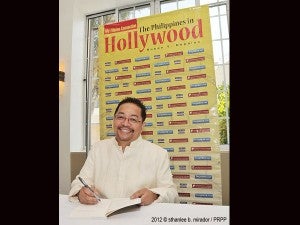 Philippine Daily Inquirer Entertainment columnist Ruben V. Nepales was recently elected chairman of the board of the influential Hollywood Foreign Press Association (HFPA)—the organization of journalists from all over the world that hands out the Golden Globe Awards annually.

Nepales is the first Filipino-American in HFPA’s 69-year history to head the organization.

He is also the first Filipino-American journalist to become a member of HFPA. He joined the organization in 2004.

The HFPA, which has 88 members from 55 countries, held its election on June 8, the eve of Nepales’ 55th birthday.

The election was a nifty birthday gift, Nepales told the Inquirer in an e-mail interview.

“I was pleasantly surprised. My wife, Janet, who is also an HFPA member, announced the good news before family and friends during my birthday dinner on June 9. I was just hoping to be reelected as board member and serve the association, which has been good to me, career-wise,” he said.

O’Reilly said she had full confidence in Nepales’ leadership capabilities.

Nepales said he was “humbled and inspired” by his election as chairman of the association.

“Every time we break a glass ceiling is a cause for celebration. It’s my fervent wish that the next generation of Filipino-Americans will shatter more glass ceilings.”

Nepales’ election was greeted with elation by members of the country’s artistic community—particularly by those who are striving to get a foothold in the highly competitive entertainment industry abroad.

Filipino filmmaker Yam Laranas, whose thriller “The Road” opened in commercial theaters in the United States recently, told the Inquirer: “Ruben’s election proves that the man is a good leader and that Filipinos are capable players in the international show business scene. He will be a great asset to the Golden Globes.”

Independent film producer Joji Alonso saw how “well-regarded and well-liked” by their colleagues Nepales and his wife, Janet, were when she held a screening of “Ang Babae sa Septic Tank” for HFPA members in Los Angeles last year.

“I think some of them only showed up because of Ruben and Janet,” Alonso said. “Hopefully, this good news would not only open the gates for more Filipino artists but provide them with a better shot at plum roles.”

“Septic” was the Philippines’ entry to the best foreign language film category in the last Oscars race.

Cannes-award-winning Filipino filmmaker Brillante Mendoza said: “Ruben’s position validates the Filipino artist’s need to connect to Hollywood. It’s definitely a very positive development not only for the local entertainment press, but for all Filipinos as well. It’s well deserved.”

“I’m looking forward to working closely with the president, Doctor O’Reilly, and the board, in fulfilling the best interest of the membership. These are crucial times for the association since it continues to be involved in issues regarding the broadcast rights to the Golden Globe Awards.”

(HFPA sued Dick Clark Productions, the Golden Globe Awards’ longtime producer, over a $150-million deal that the company had struck with NBC. In April, the court ruled in DCP’s favor in its legal fight against HFPA, which is appealing the case.)

The HFPA is marking the 70th anniversary of the Golden Globes in January next year.

“It’s a big year,” Nepales said. “We have started making plans and must step up preparations to mark that milestone.”

According to Nepales, HFPA was able to give back $13 million, through its various educational and cultural programs, in the last 17 years.

Unicef Philippines was a recent beneficiary of HFPA, which donated $25,000 to the relief efforts for children displaced by Tropical Storm “Sendong” last year.

“I am grateful,” Nepales said. “The philanthropic aspect of HFPA is one of the reasons I am proud to be a member and an officer.”

Nepales’ “Only in Hollywood” column comes out in the Entertainment section of the Philippine Daily Inquirer 156 times a year.

Nepales’ selected columns about Filipino achievers abroad have been compiled into the book “My Filipino Connection: The Philippines in Hollywood.”

After launchings in Metro Manila, Los Angeles and New York, the book will be launched next in San Francisco, at the Philippine Center, 447 Sutter Street (between Powell and Stockton), on June 29. Interested parties may e-mail Gemma Nemenzo at [email protected]