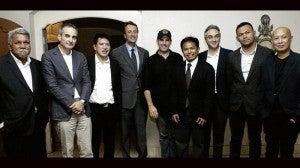 The guests of honor were in Manila to grace the opening of the Citi-Rustan’s French Film Festival (ongoing at the Shangri-La Plaza mall until June 17).

While Assayas was honored with a retrospective at the fest, Rybojad was on a promo tour for his debut film, “Special Forces,” which opened in cinemas on June 13.

It was a hectic, four-day visit for the two—but they also had a chance to take it easy and shoot the breeze with Filipino filmmakers.

Also present at the welcome dinner were Raul Sunico, Ed Cabagnot and Chris Millado of the Cultural Center of the Philippines; Cathryne Jonne Licudin of the Presidential Communications Operations Office; Christian Merer, Martin Macalintal and Astrid Renoux of the French embassy in Manila; Marti Magsanoc of the Film Development Council of the Philippines; and Yann Raymond of UniFrance Films.

The Filipino filmmakers were engaged in conversations with their French counterparts throughout the evening.

Mendoza, who won best director for “Kinatay” in Cannes in 2009, told the Inquirer that his favorite Assayas film is “Summer Hours.” “It’s very Filipino, about coping with the death of a loved one.”

Alix, whose film “Manila” (codirected with Martin) was exhibited in Cannes in 2009, chose “Summer Hours” as well. “I like how simple it is and yet slowly grows on you.”

with a drug dealer. It’s one of his more relaxed, self-assured works.”

Lejano, who is the director of the UP Film Institute, preferred “Irma Vep,” which top-bills Maggie Cheung as a Chinese actress making a film in Paris. “It’s an unforgettable film within a film that successfully mixes genres, as it pays homage to the French New Wave.”

Also on the same day, Rybojad had a string of radio interviews and met with the press to promote his first film, before flying back to Paris with Assayas.