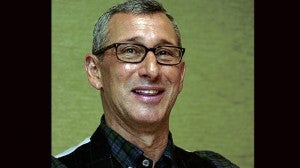 DIRECTOR Adam Shankman says the movie is “very silly” and “made for fun.” photo by RUBEN NEPALES

LOS ANGELES—How Tom Cruise ended up in a codpiece costume, without underwear, was related by “Rock of Ages” director Adam Shankman with his usual flair and enthusiasm in a recent interview.

“We had done a year of research on the wardrobe and then we saw this picture,” Adam began during our conversation at the Beverly Hilton. Tom plays Stacee Jaxx, a rock god in Adam’s movie adaptation of the hit musical featuring the world of glam bands in the 1980s. Alec Baldwin, Catherine Zeta-Jones, Russell Brand, Julianne Hough, Mary J. Blige, Diego Boneta and Malin Akerman also star in what Adam likes to call a “dude-sical.”

Grinning, Adam continued: “I tore Stacee’s whole physical introduction right out of the documentary called ‘The Decline of Western Civilization Part II: The Metal Years.’ In it, Paul Stanley of Kiss does a totally non-ironic and very serious interview while naked in bed with a bunch of equally naked girls just lying there. The girls were listening to him talk. I told Tom, ‘That is what we’re doing. That is how I want people to see you for the first time because it says everything about who your character is.’”

Adam—who started out as a dancer and choreographer and had previously directed “A Walk To Remember” and the 2007 remake of “Hairspray”—had visualized Tom’s look as a band frontman. “I had a whole thing where I choreographed it so that all the girls could roll off each other like a flower opening up and him being the thing that emerges,” he said. “It was just silliness in my head but then we saw a picture of the lead singer (Blackie Lawless) of a band called W.A.S.P. He was wearing this codpiece that shot flames out of it. I said, ‘Oh my God, dude, that’s funny!’ That is super weird … Tom thought it was hilarious, too.”

coming out of it. I was like, ‘All right, just let him. He’s playing with his character. The further he goes, the better the joke will be told.’”

Adam said Tom surprised him at the fitting session. “I saw the chaps and I was like, ‘Great, okay.’ I thought he was going to be wearing some leopard underwear or something funny. 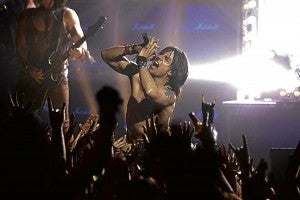 Adam, who stressed that the movie is “very silly” and “made for fun,” relished that his big star got into the musical’s spirit. “I said to Tom, ‘Go bigger or go home. There’s no halfway to tell these jokes or do these characters.’ Which is why Catherine is so crazy. It’s like people are who they are in this movie. Paul (Giamatti) is so crazy but Tom just knew that if he was going to do this, he had to go there—which included singing into Malin Akerman’s butt. That was all just part of the fun. Costumes do inform it.”

Recounting how he assembled his cast, Adam said: “When the studio asked me to do this, they were very specific and wanted it to be in the model of ‘Hairspray,’ casting big stars to ‘event-ize’ it in a global way. I had met Tom, who told me how much he loved ‘Hairspray.’ He made some off-comment about when are we going to do a musical. I said in my head, what am I going to do, like ‘The Sound of Music’ remake with Tom Cruise? It was never going to happen. Then this opportunity came up. I thought, this is really interesting because I can get the biggest movie star in the world to play the biggest rock star in the world.”

“Rock of Ages” really intrigued Tom, said Adam. “So after he finished ‘Mission: Impossible,’ we went to the vocal coach for Tom’s first lesson. He could sing like how you will hear him in the movie. We were like, ‘This is going to work!’ He said, ‘Yes.’ The second that was announced, everything happened really fast.”

The filmmaker revealed that Tom worked for four and a half months on just the singing, then six months on the choreography. “When Tom was singing, and I’m not kidding, for four to five hours a day for four and a half months, I got scared that he was going to blow out his voice. Mary J. Blige certainly didn’t need to be taught how to sing. She literally walked in and laid everything down in one take. Everybody else had about a month or so to prepare. It took Tom the longest time.”

Pick of the litter 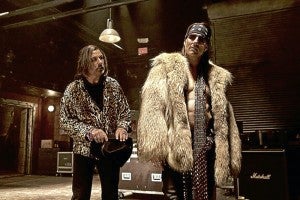 It seems all worth it—the cast, especially Tom and Alec, are getting good buzz on their “fun” performances.

“That day (of Tom’s first lesson), we got a call from Alec’s reps,” Adam said. “Alec is an old friend of mine. I said, ‘How would you feel about playing a guy who runs a rock club that you started in the ’60s and you’ve been stoned for 30 years that you didn’t realize you were gay?’ Alec thought that was hilarious. All I had to do was talk to Russell Brand, who I had made another movie with. Russell was perfect because he can roll out of bed and come to the set in his clothes and we can shoot. I said to Russell, ‘You’ll be playing Alec Baldwin’s boyfriend.’ He was like, ‘I’m in!’ It was much simpler than one would think. Catherine said yes without reading the script. She said, ‘Darling, I’d love to come and play.’ I think she wanted to sing and dance again and she also knew that it was only five days of work. I really had my pick of the litter.”