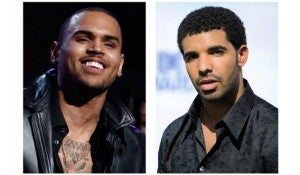 NEW YORK — Singer Chris Brown, his girlfriend and his bodyguard were injured when a dance floor showdown with members of hip-hop star Drake’s entourage turned into a bottle-hurling brawl earl Thursday at a nightclub, police said.

Brown tweeted a photo of himself with a cut chin, then later removed it, as well as other messages about the fight, including epithets and taunts. A representative later released a statement saying the singer and his girlfriend, model Karrueche Tran, were victims of a “brutal attack.”

A representative for Drake said the star was on his way out of the club when the altercation began.

“He did not engage in any activity which resulted in injury to person or damage to property,” according to the statement.

Witnesses told police that two men approached Brown’s table and asked him whether he had a problem with Drake, and he replied he did not. Later, as Brown was leaving the club, five men met blocked his way on the dance floor and started taking off their shirts and yelling, police said.

At some point during the face-off, bottles started flying. Chief NYPD spokesman Paul Browne said it’s not clear whether the bottles were tossed by members of either entourage, or if bar patrons eager to egg on a dispute started throwing them.

Five bystanders, four women and a man, also suffered cuts during the fight at the club W.i.P. in Manhattan’s SoHo neighborhood, police said. Brown’s bodyguard suffered a more serious cut to the head, but all the victims were released from the hospital later Thursday.

Police were looking for surveillance footage and talking to patrons who witnessed the melee. No arrests have been made and no complaints filed, and no one has identified any one person as an assailant, police said.

“Chris and his party are cooperating with NY authorities who are pursuing this incident further,” Brown’s representatives said in a statement.

Neither star was on scene when police arrived around 4 a.m. Thursday. It’s not clear what prompted the fight. Both Brown and Drake at one time dated singer Rihanna.

Brown spoke with police Thursday; Drake, who was scheduled to perform at Saratoga Springs Performing Arts Center Thursday night in upstate New York, said he was unable to and would do so at a more convenient time with his attorney.

Brown had a violent relationship with “Umbrella” singer Rihanna and is still on supervised probation for attacking her on the eve of the 2009 Grammy awards, leaving her with a split lip, a black eye and other injuries.

They are on good terms now; both performed at this year’s Grammy awards and also recently debuted two songs featuring each other. Brown sings and raps on the remix of Rihanna’s “Birthday Cake,” and she appears on a new version of his song “Turn up the Music.”

Police in Miami are investigating claims made in March by a 24-year-old woman that Brown snatched her cellphone outside a nightclub when she tried to photograph him.

Rihanna dated Drake very briefly after Brown, and has said they didn’t last long in part because she was “too fragile” from the split.

She also recently collaborated with Drake on his hit “Take Care” and appeared in his video. Drake is one of rap’s top-selling rappers, and his latest album, “Take Care,” has sold about 1.8 million copies. He is also known for playing the character Jimmy Brooks on the TV show “Degrassi: The Next Generation.”