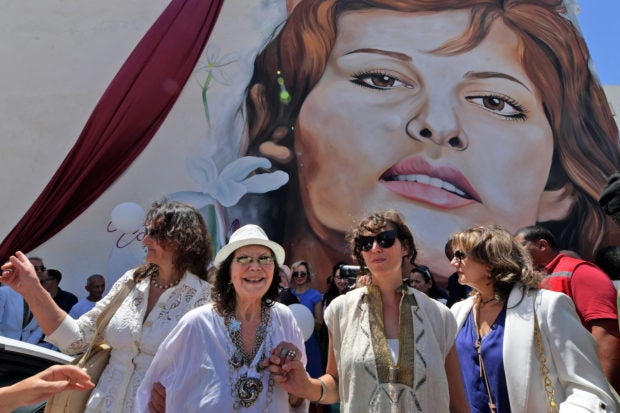 Tunisian actress Claudia Cardinale (second from left) poses for a picture in the city of La Goulette near the Tunisian capital on May 29, 2022, during the inauguration of the Claudia Cardinale street. Image: AFP/Fethi Belaid

Actress Claudia Cardinale may have been a sixties legend of Italian and French cinema, but in Tunisia, in the portside district where she grew up, she says she feels “at home.”

“I left very young, but I spent my whole childhood here, my adolescence,” said Cardinale, now 84. “My origins are here.”

To celebrate her connection to the North African country, authorities on Sunday named a street after her in the La Goulette suburb of the capital Tunis, where petals were scattered in a ceremony in her honor.

“You marked the world of cinema for almost half a century with your dazzling beauty, your charisma and through the roles you played,” said Amel Limam, the mayor of La Goulette.

“I am very honored, because it is here that I was born and spent my childhood,” Cardinale said. “I kiss you!”

The multicultural beachfront neighborhood was once home to a sizable Sicilian population—including Cardinale’s parents.

Before Tunisia’s independence from France in 1956, more than 130,000 Italians were resident, and many of their ancestors had settled there before French colonial rule.

“I still keep a lot of Tunisia inside me—the scenery, the people, sense of welcome, the openness,” Cardinale told Agence France-Presse.

In 1957, aged 19, Cardinale won a beauty contest for “the prettiest Italian” in newly independent Tunisia.

Her prize was a trip to the Venice Film Festival, where she caught the eye of influential cinema figures.

That led to her first film role, in Mario Monicelli’s “Le Pigeon.”

Soon afterwards, she moved with her family to Rome to pursue her career, which took off with a role in Luchino Visconti’s film “The Leopard,” alongside French film star Alain Delon and Hollywood legend Burt Lancaster.

That was the start of a long career that has continued into her 80s. After starring in The Pink Panther opposite David Niven in 1963, she shot to attention in the United States and Britain.

In one of her latest roles, she plays a grandmother in a film by Tunisia’s Ridha Behi, “L’ile du Pardon,” currently in post-production.

Her parents never recovered from their departure from Tunisia, which they experienced as an exile.

“It was very hard. My father never wanted to come back, that’s how much he dreaded the pain of what was for him a real heartbreak,” she said.

“My mother recreated Tunisia in Italy. She planted all Tunisian plants and kept on cooking Tunisian meals.”

But Cardinale said the Tunisian sense of hospitality can be a model for how to treat migrants.

The country “can and should be proud of its history,” she said.

And in an era when many Tunisians are willing to risk their lives boarding unseaworthy boats to reach Europe, she stresses the importance of “remembering this shared past to build the future.”

“The wind changes, and we’re all equal in terms of the need to leave,” she said.

“Tunisia for us was a welcoming land. I wish everyone in the world who needs to leave somewhere could receive the same welcome.” AP

Italian star Claudia Cardinale puts her wardrobe up for sale