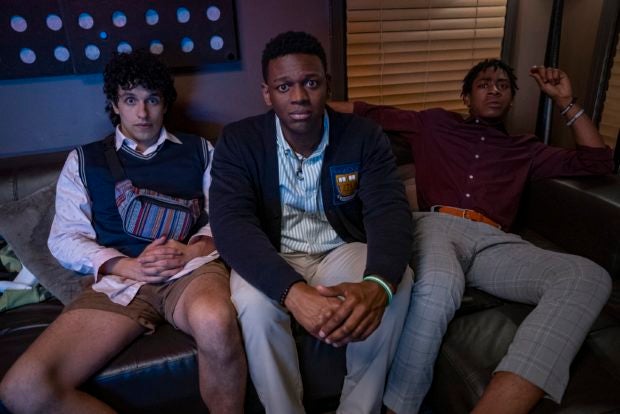 But its young heroes’ night of party-hopping hi-jinks quickly takes a more serious and sinister turn, in large part because they are Black.

Unlike white characters from genre classics like “Superbad” who emerge unscathed from playful interactions with bemused cops, college students Sean and Kunle panic when they find a high-school girl passed out on their living room floor.

Fearing what might happen if they dial 911 in such a compromising scenario, they rope Latino housemate Carlos into helping ferry her to hospital, setting off a series of hilarious and terrifying consequences.

“It seems like it’s gonna be a ‘Superbad’ or a ‘Booksmart’ type of movie. I feel like even the characters want this so badly to be like a teen comedy,” the movie’s writer K.D. Davila told AFP. “They want it to be that, but it’s not, it can’t be.”

“Which is a fucked-up, bitter reality of what it’s like for a lot of people,” agreed director Carey Williams.

At the heart of “Emergency,” out in United States theaters Friday and on Amazon Prime Video next week, is the constant and everyday burden placed on young men of color whom society is quick to perceive as a threat.

Growing up, Davila said she “saw this phenomenon where my dad and other men in my family, especially the ones who were darker skinned, had to do this strange calculation every time we went anywhere, (of) considering how they’re being perceived.”

“You can make those calculations and you can do your best to project ‘innocence’ or whatever. But it doesn’t matter sometimes. You can still get pulled over and searched for no reason.”

Davila and Williams turned those observations into a short film, winning awards at festivals including Sundance and SXSW in 2018, before Amazon and a cast including pop star Sabrina Carpenter came aboard for this year’s feature-length version.

The intervening period brought the death of George Floyd, the explosion of Black Lives Matter protests and a greater focus on diversity in Hollywood, but the filmmakers reject the idea their film is “topical.”

“This is literally not new. We’re glad that people were talking about it and engaging with it. But the idea that it had to get to this point was a little surprising,” said Davila.

In a nod to the superficiality of society’s change, an indignant white couple film themselves confronting Sean and his friends simply for parking at night outside their home, the lawn of which proudly bears a “Black Lives Matter” sign.

But the filmmakers say they did not set out to preach to white people about race.

“We weren’t like ‘We’re teaching you how bad this is!'” said Davila.

Instead, “Emergency” was made “for people who’ve been through this, who’ve been living in this culture of fears.”

“Hopefully, the movie is cathartic and funny to people who’ve been through that. That was the thing that might be a little different in our approach than other movies.”

For Williams, the film is an opportunity to delve into the young friends’ relationship, and their different approaches to handling “Black masculinity and vulnerability.”

Clean-cut and trusting Kunle (Donald Elise Watkins) doesn’t initially feel he is treated any differently due to his skin color, while cocky and macho Sean (R.J. Cyler) has had a fear of authority seemingly drilled into him by lived experience.

This contrast leads to the pair making very different choices over the course of the night, each of which Williams hopes the audience can empathize with.

“There is a lot of humor… in the way they reacted to each other trying to do the right thing and get out of the situation,” said Williams.

He added, “The film should raise questions about how these young men have to maneuver through the world.” JB

Read Next
LOOK: Nathalie Hart begins military training to become army reservist
EDITORS' PICK
Beyond the Chocolate Hills: A farm-to-table, heritage culinary adventure of Bohol
Metro Manila logged most number of new COVID-19 cases — OCTA Research
WHO says monkeypox is not yet a health emergency
A massive highway complex makes living in the South highly attractive
Guarding Sara: Why next VP is getting own security team
House energy committee chair Arroyo bats for cheap electricity
MOST READ
Leon Barretto steps up for sisters, asks dad Dennis Padilla: ‘Please stop resorting to public shaming’
LOOK: Rita Daniela pregnant with first child
Marjorie Barretto to speak up on Dennis Padilla, kids’ relationship ‘in time’
Guarding Sara: Why next VP is getting own security team
Don't miss out on the latest news and information.