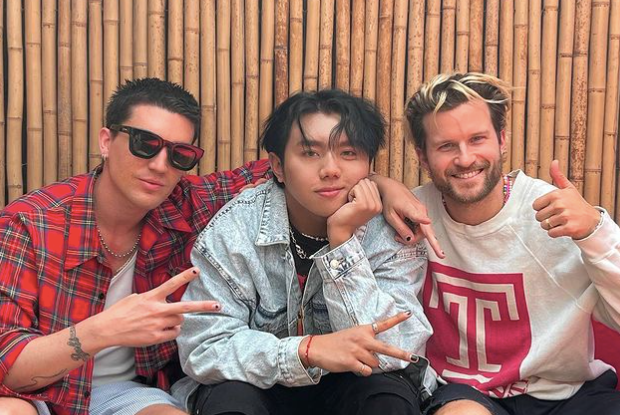 Is a Zack Tabudlo and LANY collaboration in the works? Fans are speculating this as Tabudlo showed himself meeting the American indie pop band.

The singer can be seen with LANY members Paul Klein and Jake Goss on his Instagram page today, May 12. Klein had his arm on Tabudlo’s shoulders, while Goss gave an “okay” gesture.

Tabudlo did not give further details about the meeting, only captioning it with a shushing emoji.

For its part, LANY showed a photo of themselves with Tabudlo on its official Facebook page, also today. The band did not give details about the meeting as well. They only sent fans peace, flaming heart and rose emoji.

Fellow musicians Moira Dela Torre and Janine Berdin cheered on Tabudlo as they expressed happiness for him.

Fans also started speculating on a possible collaborative track between LANY and Tabudlo.

“Is this a collab?” one @sammikaaaaay asked the group.

“Preparing my grave for a possible collab,” another netizen, @justgreypril, joked.

“Give us [a] heartbreaking song please,” one Gabby Balahadia told LANY and Tabudlo.

Meanwhile, one Isha Hizon stated that a possible collaboration between the musicians could either be “nakakakilig or nakakapanlumo (could make you giddy or depressed).”

Tabudlo is a singer-songwriter known for his hits including “Binibini,” “Nangangamba” and “Asan Ka na Ba.”

Meanwhile, LANY is an indie band known for its songs “Malibu Nights,” “ILYSB” and “Thick and Thin,” among others.  /ra