Filipino Olympian Hidilyn Diaz has received praise from the synth-pop band LANY after she earned the first ever Olympic gold medal for the Philippines yesterday, July 26.

Diaz delivered the Philippines’ historic win after besting China’s world record holder Liao Quiyun in the Tokyo Olympics. She ended the country’s drought for a gold medal by lifting a total of 224 kilograms in the women’s 55 kilograms weightlifting competition.

“Congrats to @hidilyndiaz and the Philippines (who have been so unbelievable to my band) on [your] first ever gold medal,” LANY’s vocalist Paul Klein said through his Instagram Stories today, July 27. His greeting was accompanied by a photo of Diaz during the Olympics. 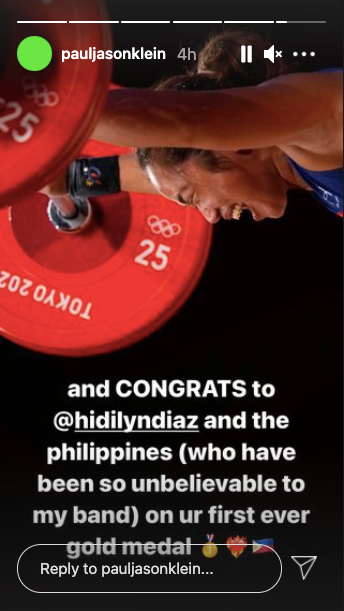 Charles Leslie Priest, who plays keyboards for the American band, also used the same photo when he extended his congratulations to the Olympian, on his Instagram Story also today. 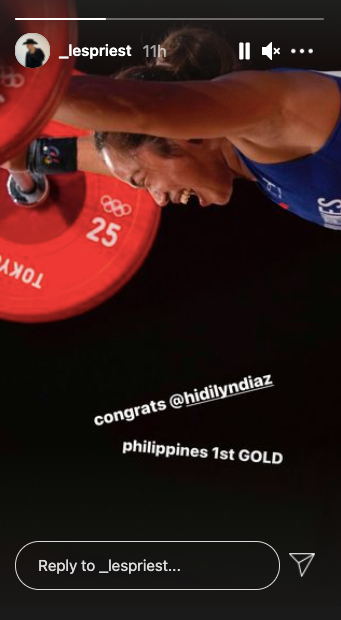 For his part, drummer Jake Goss described Diaz’s victory as “history” while he extended his love for LANY’s Filipino fans, also through an Instagram Story today.

“History. Mahal kita sobra (I love you so much), Philippines!” he said while showing a photo of Diaz celebrating during the competition. 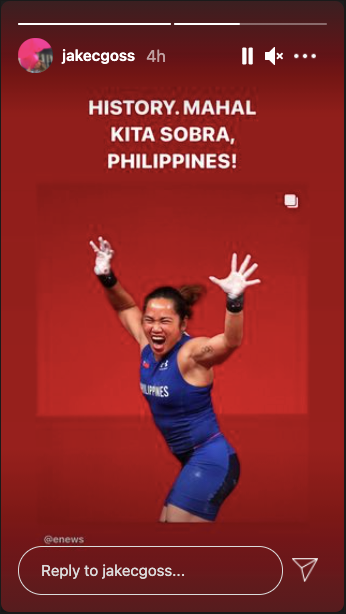 Diaz’s medal is the only gold among the Philippines’ 11 Olympic victories. She is the second Filipino athlete to win multiple Olympic medals, following swimmer Teofilo Yldefonso who won bronze in the men’s 200-meter breaststroke in 1928 and 1932.

LANY is a three-piece indie pop band known for its hit songs “Malibu Nights,” “ILYSB” and “Thick And Thin,” among others. Filipino fans have a special place in the band’s heart as Klein admitted he thinks they are “the best in the world.” The band also said during a concert in 2019 that they are willing to “come back (to the Philippines) for the rest of our lives.”  /ra