LANY’s Paul Klein to PH fans: No one tops you 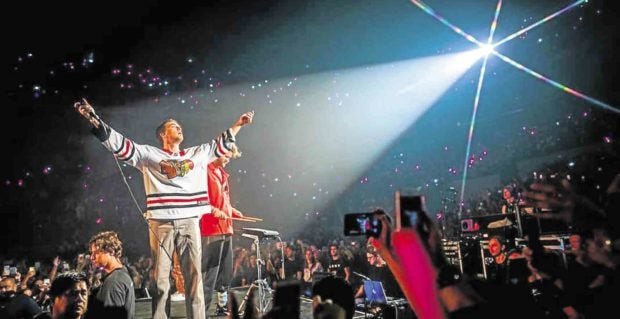 The three-man band wants to keep coming back to Manila “for the rest of our lives.” —PHOTOS BY JASPER LUCENA FOR MMI LIVE

It was the second of LANY’s three concerts at SM Mall of Asia Arena. Ten songs into the set, the band’s frontman, Paul Klein—typically a carefree figure onstage—was seemingly overwhelmed while he addressed a crowd so loud it threatened to drown out his voice.

“You’re the best in the world,” he declared, patting his chest and pumping his fist. And then, wagging his finger, he added, “No one tops you, Manila … no one.”

Perhaps it’s safe to say that the Philippines is one of the American group’s biggest—if not the biggest—market at the moment. If you visit LANY’s profile page on the music-streaming service Spotify, you will find out that four of the top five cities that comprise the bulk of its listeners are from the Philippines: Quezon City, Makati City, San Juan City and Manila.

And while the band mostly plays at concert halls in other countries, it could easily and quickly sell out arenas in this part of the world. Five times now, to be exact. Prior to this three-night affair, just a little over a year ago, LANY did two nights at the Big Dome.

No wonder the band wants to “come back for the rest of our lives.” Simply put, Filipino fans couldn’t get enough of LANY. And the trio—also composed of Les Priest (keyboards) and Jake Goss (drums)—couldn’t be more grateful.

“Seriously, from the bottom of our hearts, thank you for spending your hard-earned money and time, and for making sacrifices just to be here with us tonight,” Paul said. “This would be so boring without you.” 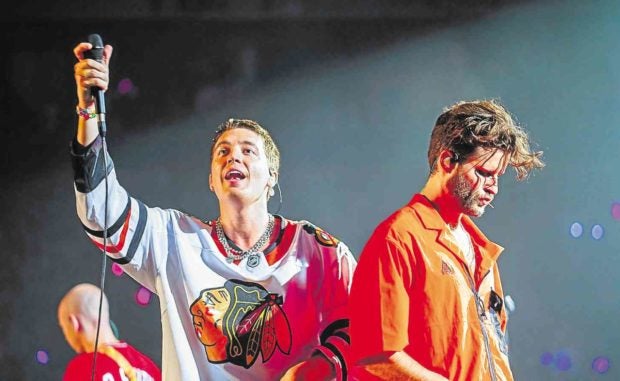 By the time the band landed in Manila last week, it had already played around 80 shows. That’s for this year alone. But if they were, in any way, feeling tired, it didn’t show. In fact, the three artists played like well-oiled machines that have seemingly found their optimal pace and rhythm onstage.

After a two-minute countdown, Paul made his way onstage, skipping around, his arms outstretched, trying to absorb every ounce of adulation being sent his way by way of earsplitting cheers. Jake, Les and touring musician Guiliano Pizzulo, on the other hand, settled atop the video backdrop that doubled up as a platform.

Together, they opened the show (mounted by MMI Live and Karpos Multimedia) with “Thick and Thin”—the lead-off track of their latest album, “Malibu Nights,” whose bouncy, hip-hop inflected backbeats belie the confusion permeating a love teetering on edge. “But was it really love/If you can leave me for/Something so innocent/Is this the end?” Paul crooned, his chest voice dissolving into a falsetto that reeked of resignation.

For one and a half hours, the band filled the arena with its familiar sound—lush and atmospheric synth-pop mid-tempos that evoke balmy Los Angeles afternoons.

But still, each of the 18 songs had just enough elements or subtle flourishes that stopped them from bleeding into one another: the hoppity synths of “Thru These Tears,” the catchy snaps of “Good Girls” or the sultry, R&B swagger of “Run.” And with every number, the stage lighting and visuals shifted to suit the changing moods.

In “Made in Hollywood,” the band bathed in hazy glows of neon reds and oranges. A dizzying snarl of pink, purple and blue analog noises flashed during “Hurts.” “Pink Skies” was, fittingly, accompanied by images of the Malibu beach at dusk, with swathes of pinkish clouds overhead.

In the piano ballad “Malibu Nights,” which featured some of Paul’s most impassioned vocals, the venue turned into a sea of lights.

But more than the sights and sounds, it was Paul’s writing that truly drove the songs home. He captures the feeling of loss, longing and sadness in a way that’s simple, but no less searing. And when enveloped with catchy hooks and melodies, you get head-bopping songs that deceptively pack a wallop.

“Half my clothes are at your house/And I don’t want them back,” the 31-year-old artist crooned from the B-stage during an intimate performance of “13.”

The night’s overarching theme was heartache. But it wasn’t there for the fans to wallow in—not all the time, at least. Every so often, it was about overcoming it… and maybe even finding some relief as one looks back in hindsight.

“I’m not happy and you know it and you still don’t even try/Broken down, I’ve had enough/If this is love…” Paul sang in “Super Far”—LANY’s most popular single thus far—before pausing and turning the microphone toward the crowd.

“I don’t want it!” the fans, mustering all their lung power, chorused as if on cue. Then, they erupted into cheers and laughter.

Read Next
A 2nd MMFF to be held in summer announced
EDITORS' PICK
Leaked: A 60x Zoom and all-new Helio G96 mean a complete overhaul for TECNO Mobile’s new CAMON 18 series
Delivering delight against all odds
Manila Ocean Park reopens to public
PNP urges public: Play your part, follow safety protocols while on holidays
Next level mobile photography within reach with vivo X70 co-engineered with ZEISS
Malls, parks in NCR still off limits to minors even with eased restrictions
MOST READ
Robredo to supporters: Be calm, gentle and do good deeds
Matibag calls Senate budget hearing ‘political,’ gets kicked out
‘Saving’ Manila Bay: Dolomite beach, wetlands drowning in wastes
The future of Malampaya
Don't miss out on the latest news and information.