Rihanna gets own marble statue as tribute from Met Museum, Vogue | Inquirer Entertainment

Rihanna gets own marble statue as tribute from Met Museum, Vogue 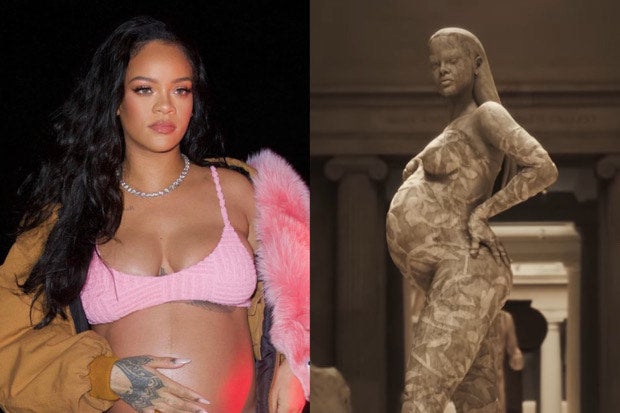 Rihanna may not be in attendance at the Met Gala 2022 but the event was still graced by her presence through a statue of her, a tribute from the Metropolitan Museum of Art and Vogue magazine.

The Barbadian singer showed a montage video of Met’s statues along with hers and described it as a “historic tribute,” as per her Instagram and Twitter pages yesterday, May 3.

“Shut down the [Met] in marble! What’s more gilded than that? [Laughing out loud]! Thank you [Metropolitan Museum of Art] and [Vogue Magazine] for this historic tribute! [You all] bad for this one!” she said.

The marble figure was inspired by Rihanna’s recent photo shoot with the fashion magazine where the singer flaunted her growing baby bump, donning a fitted red lace bodysuit.

shut down the met in marble! what’s more gilded than that? Lol! Thank you @metmuseum and @voguemagazine for this historic tribute! y’all bad for this one! pic.twitter.com/NawYMd0RpL

“The statue of ‘Eirene (The Personification of Peace)’ is usually the highest-profile marble goddess [Met Museum] Greco-Roman galleries. But now we’ve got [Rihanna] straight off this month’s Vogue cover,” it said.

Rihanna announced last January that she is expecting her first child with rapper A$AP Rocky by showing off her baby bump. She later on confessed that they neither planned nor “planned against” her pregnancy, adding that she did not keep tabs on her ovulation and “just had fun.” JB