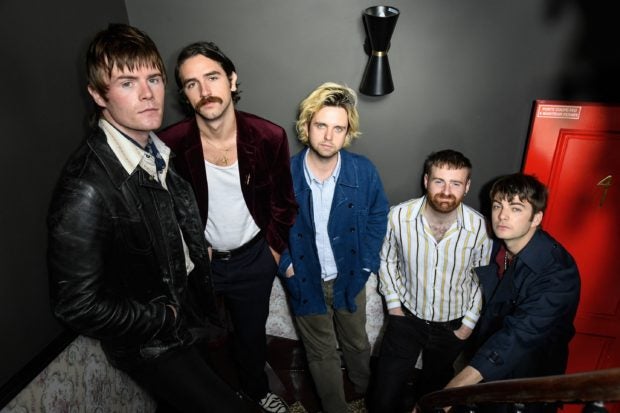 Fontaines DC’s raw, romantic tales of Dublin street life marked them out as the Next Big Thing in rock. Moving to London in the pandemic has meanwhile taken their music in a darker direction.

Labelled the “best band in the world” last month at Britain’s NME Awards, the Irish five-piece have built up a daunting level of hype in a few short years.

Distilling the rowdy essence of Irish pubs and literature, their 2019 debut “Dogrel” was a relief to many who felt today’s youth too clean-cut and worried about their mental health to carry forth the flame of dirty, drunken rock’n’roll.

Their attachment to home has not waned despite the band relocating to London.

“The things you miss and you yearn for become a kind of glue between us as Irish people abroad,” guitarist Conor Curley told AFP during a recent visit to Paris.

Part of that was their shock at the prejudice they encountered in Britain, which became the undercurrent of their third album “Skinty Fia,” out on Friday.

Opening track “In ar gCroithe go deo” (“In our hearts forever”) refers to a true story from 2020 when an Irish woman’s family was denied the right to put the phrase on her gravestone because it might be mistaken for a political slogan.

“The story sent shivers down my spine,” said Curley. “The idea that they thought the Irish language was provocative is incredibly hurtful, a language that (the British) tried to forcefully eradicate.”

“Maybe previous generations that came before us thought ‘Ah fuck it. Let’s just ignore this stuff and get on with it.’ But being in the position of artists, trying to question things, our view was: That’s not fucking on.”

Their first two albums, “Dogrel” and “A Hero’s Death,” drew on the history of alternative indie with hints of classic rock’n’roll as the backdrop to frontman Grian Chatten’s growling, shouted lyrics, a mix of romantic calls-to-arms and sombre visions of modern life.

“Skinty Fia” continues their move away from their early poppier anthems with a more electronic, clubby feel that reflects their decision to record exclusively at night.

“We were yearning for something that wasn’t as rigid as a nine-to-five. We didn’t want to feel like we were starting work every morning, bringing our lunch and so on,” said Curley.

They were also conscious of wanting to escape the hype they had built, with so much fixation on their image as a bunch of “punk poets” trading their favorite verses in the backrooms of scuzzy Dublin pubs.

“That was the genesis of the band… but it became like I didn’t even want to read poetry anymore because I felt like people expected me to,” Curley said with a laugh.

“Almost like journalists were pushing some Yeats towards me, saying ‘Get it in you!'”

Still, the band have hardly given up on their old influences. The new album has titles like “Nabokov” and “Bloomsday” (a reference to James Joyce) that make clear literature remains the band’s lifeblood.

Does that make them feel a little out of touch with a young generation often characterized as clean-cut and obsessed more with social media than books?

“Maybe we do feel a little bit out of our time. We’re one of the last generations to glorify in smoking fags and going to the pub,” he said. “We were never trying to be like that. It’s always felt natural. We’re just like-minded people who are incredibly romantic about that idea of the Dublin scene — of writers like Patrick Kavanagh and all those heads floating around the city, being in pubs, sharing things that they’ve created.” JB

Read Next
Here come the new faces: Jana Francine Taladro and Mika Reins in ‘Raya Sirena’
EDITORS' PICK
What to watch out for when selecting a video surveillance solution
House energy committee chair Arroyo bats for cheap electricity
DOH says COVID-19 cases plateauing, but public shouldn’t be ‘complacent’
23,000 cops to be deployed nationwide for school reopening
Look Through: The fate of impounded stray dogs
Unleash the photographer in you this World Photography Day with vivo smartphones
MOST READ
Sharon Cuneta asks for prayers for friend in ICU who suffered silent stroke
Korina Sanchez reunites with former ABS-CBN co-anchors Julius Babao, Cheryl Cosim
Light therapy could be the answer to your sleep problems
Solons file resolutions seeking probe on ABS-CBN, TV5 merger
Don't miss out on the latest news and information.