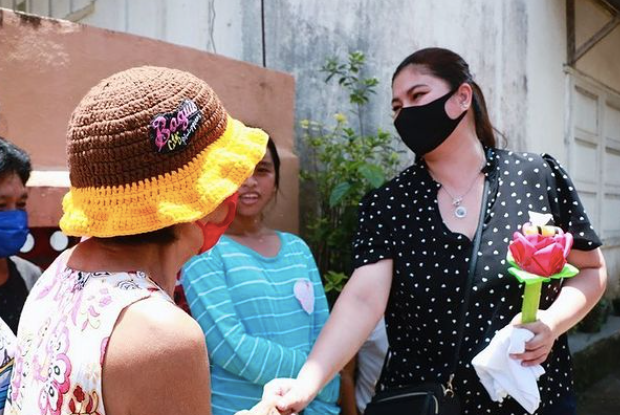 Angel Locsin explained that she chose not to wear pink during relief efforts for tropical storm Agaton victims in Leyte because she did not want politics to get in the way of helping.

The actress-philanthropist, a vocal supporter of presidential candidate Vice President Leni Robredo, recently chanced upon Sen. Ronald “Bato” dela Rosa during the relief operations in Leyte. This led one @WalaAkosi to be concerned that Locsin’s photos in the province would be used to spread misinformation, as seen on Twitter yesterday, April 20.

Locsin then replied to the netizen, also yesterday, stressing that victims of the calamity need everyone to work together.

(I really didn’t wear a pink or campaign shirt so that [politics] would not get mixed with the distribution of relief goods. Let us just love love love because what is needed by the people affected by the landslide is for all of us to to help one another.)

“It’s not you, it’s some people who are so desperate to create some fake news. I am cautious. Love you and God bless you more,” the netizen told Locsin, who replied, “No problem!”

Locsin was accompanied by her husband, businessman-producer Neil Arce, during her visit to Leyte. Prior to meeting Dela Rosa, she helped distribute relief packs to evacuees in Baybay City.

The actress also met supporters of Ferdinand “Bongbong” Marcos Jr. and his running mate Sara Duterte-Carpio while in the province.  /ra