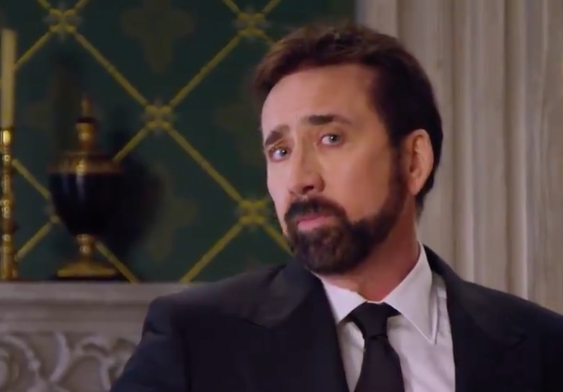 Nicolas Cage in “History of Swearing.” Image: screengrab from Twitter/@netflix

LONDON — Hollywood star Nicolas Cage says his immediate reaction to being asked to play a version of himself in the new comedy action film “The Unbearable Weight of Massive Talent” was a resounding “no.”

The movie is a love letter to the actor and his career, which spans over four decades. Cage stars as Nick Cage, an aging actor struggling to book new roles. Desperate, he accepts the offer to appear at a wealthy fan’s birthday party in Europe in exchange for a $1 million paycheck.

Unbeknownst to him, the fan is a criminal and Cage gets enlisted by two CIA operatives to take him down. The task gets complicated when Cage and his target bond over their love for cinema, and Cage’s daughter and ex-wife find themselves in the eye of the storm.

Co-writers Tom Gormican and Kevin Etten hoped against the odds that Cage would take on the role.

“I said ‘no, no, no, no.’ Nothing in my body, no muscle in my body told me to play myself in a movie. It was terrifying. It was a high wire act,” Cage told Reuters, adding that a letter from Gormican, who also directed the film, made him change his mind.

“I was worried that it would be like an Andy Samberg SNL (“Saturday Night Live”) sketch, sort of a mockery. But he wanted to present a film that had characters that were more human, more sensitive, more personable and not just cartoon characters.”

“The real challenge was that you’re using some real things from Nicolas Cage’s life that have been heavily reported, on the financial difficulties, where he’s at in his career, and then some things that were complete works of fiction that impacted the real Nicolas Cage,” Gormican said.

“We had to find this balance between who he really was and who we were presenting to the world.”

While the film’s lead character and his alter-ego, a younger “Nicky” are fictional, Cage said some aspects of his real self seeped into the story.

Nicolas Cage wants to be called a ‘thespian,’ not ‘actor,’ and here’s why