Film academy moves up discussion of Will Smith slap to Friday 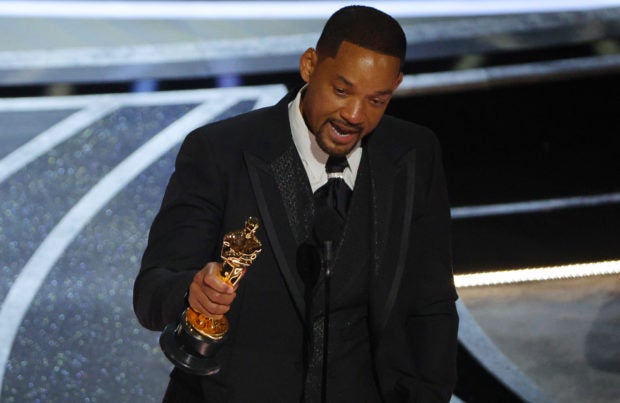 LOS ANGELES — The Academy of Motion Picture Arts and Sciences has moved up its meeting to discuss possible sanctions against best actor winner Will Smith for slapping presenter Chris Rock to Friday, a letter from the group’s president said.

The board of governors of the organization, the group that hands out the Academy Awards, previously had been scheduled on April 18 to discuss the incident at last month’s Oscars ceremony.

Smith resigned from the academy on Friday and said he would accept whatever consequences the group decided were appropriate.

Because Smith resigned, the academy no longer needs to follow the legally prescribed timetable to consider the matter, academy President David Rubin said in a letter to members.

“It is in the best interest of all involved for this to be handled in a timely fashion,” Rubin said.

Possible actions could include making Smith ineligible for future awards or banning him from future Oscars ceremonies.

At the March 27 televised event, Smith strode up to the stage after comedian Rock made a joke about the appearance of Smith’s wife, Jada Pinkett Smith, then smacked Rock across the face.

Less than an hour later, Smith gave a tearful speech on stage as he accepted the best actor award for his role in “King Richard.” After the ceremony, he was seen dancing at Vanity Fair‘s annual post-Oscars party.

Rock’s joke about Smith’s spouse made a reference to the 1997 film “G.I. Jane” in which actress Demi Moore shaved her head. It was unclear whether Rock was aware that Jada Pinkett Smith has a condition that causes hair loss. JB

Chris Rock ‘still processing’ slap by Will Smith at Oscars