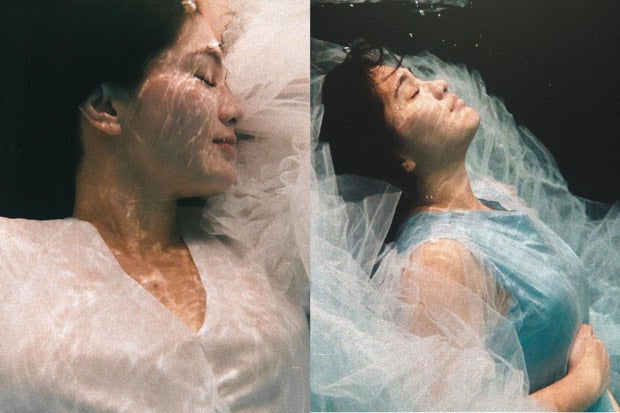 Dimples Romana has been celebrating her pregnancy aesthetically by taking on an underwater photoshoot, which completes her four element-maternity concept.

Romana donned blue, white and red tulle dresses while posing submerged in the water, as seen on her Instagram page today, April 6. The portraits were taken by photographer and free diving instructor Mark Zapanta.

The actress also spoke about the feeling of drowning and fighting the waves of life, which she appears to represent through her photos.

“I pray today that whoever is reading this and is feeling the weight of the waves on your shoulder and you feel like giving up, STAY, KEEP FIGHTING, KEEP SWIMMING, we are part water anyway,” Romana said. “And as they say, let the waves carry you where the light cannot. I’m with you in prayer.”

Aside from the water element concept, Romana also had air, fire and earth-themed photo shoots which were taken by celebrity photographer Shaira Luna.

Meanwhile, Romana recently went sentimental as she sent off her daughter Callie to Australia to study aviation. The actress described Callie’s departure as a “bittersweet learning” for her as a parent, but added that the experience is still worthy of celebration. JB