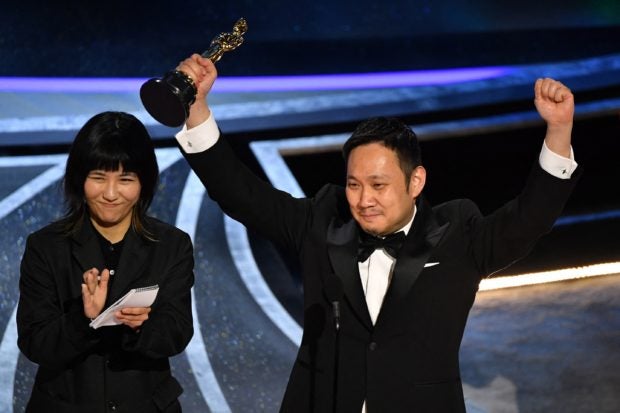 Japanese director Ryusuke Hamaguchi, whose “Drive My Car” won this year’s best international film Oscar, said Tuesday he is ready to “take on the challenge” of a Hollywood blockbuster.

The 43-year-old said he was still in shock over the film’s Oscar win.

“Until the very last minute, I was convinced that the Oscars and my life were two things that had absolutely nothing in common,” he told reporters in Tokyo at a press conference with the film’s lead Hidetoshi Nishijima.

The 51-year-old actor said he thought the film’s success was due in part to its universality and “the fact that the main character has lost someone dear and is trying to continue living nonetheless.”

Inspired by a work by famed author Haruki Murakami, the three-hour film scooped multiple honors en route to its Oscars triumph, including Golden Globes and a BAFTA.

Hamaguchi said he had received some counsel from fellow director Chloe Zhao, whose “Nomadland” was the toast of the Oscars last year and who went on to direct Marvel superhero movie “The Eternals.”

“She told me ‘Stay sane,’ and I found these words very important,” said Hamaguchi, adding that he felt ready to “take on the challenge” of a Hollywood blockbuster, if offered the opportunity.

Taking on such a project would depend on the subject of the film and whether conditions would allow him to “keep my feet firmly on the ground,” he added.

Hamaguchi is the fifth Japanese director to have a film receive the foreign-language Oscar, along with the likes of cinema icon Akira Kurosawa, whose “Rashomon” won in 1952.

“Drive My Car” was also nominated for best director and best adapted screenplay, as well as best picture, a first in the history of Japanese cinema. JB