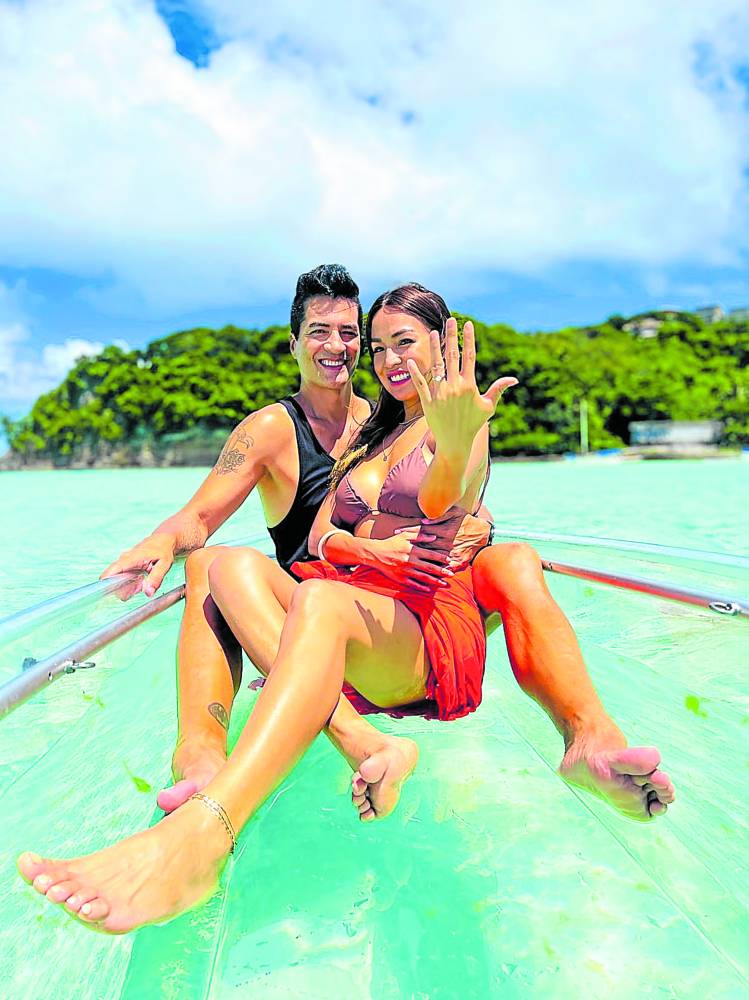 Love is a tricky thing in show biz. There are just too many temptations, so many celeb couples eventually “pack up” and “change casting.” Aubrey Miles and Troy Montero ought to give a crash course on how to make relationships last in the biz. After 18 years of being together, they are finally engaged. The gorgeous couple gives “love in Tinseltown” a good name.

Here’s my chat with Aubrey:

Did you have an inkling that Troy was going to propose? None at all. I think he attempted so many times because he made me try rings before the pandemic and asked me to go on trips, but I was busy.

Please share a bit more about Troy’s marriage proposal. I told Troy I wanted to go glass kayaking when we were in Boracay. He was unusually quiet that day (March 22). It’s hard for him to plan something secretly because I always ask him details, so he just went along with what I wanted to do. When we were in the kayak, he said, “I have something for you,” and opened the box and asked, “Do you like it?” I replied, “Wow, I love it … it’s big.” Then, he popped the question, “Will you be my forever?” I said “thank you” before saying “yes.”

After all these years, why do you think Troy decided to propose now?Troy feels I’m more open to the idea, and our vibe is already different when we talk about getting engaged. I used to say that I don’t mind not having an engagement ring or a proposal stage. Since we’ve been together for so long, it seems like we are past that stage already. So, kahit diretso kasal, it’s OK with me. But nakakakilig pala to be engaged. I feel like a kid when I look at my ring. It’s another milestone and story to tell.

What will your wedding be like?It’ll be an outdoor wedding in the mountains or beach. 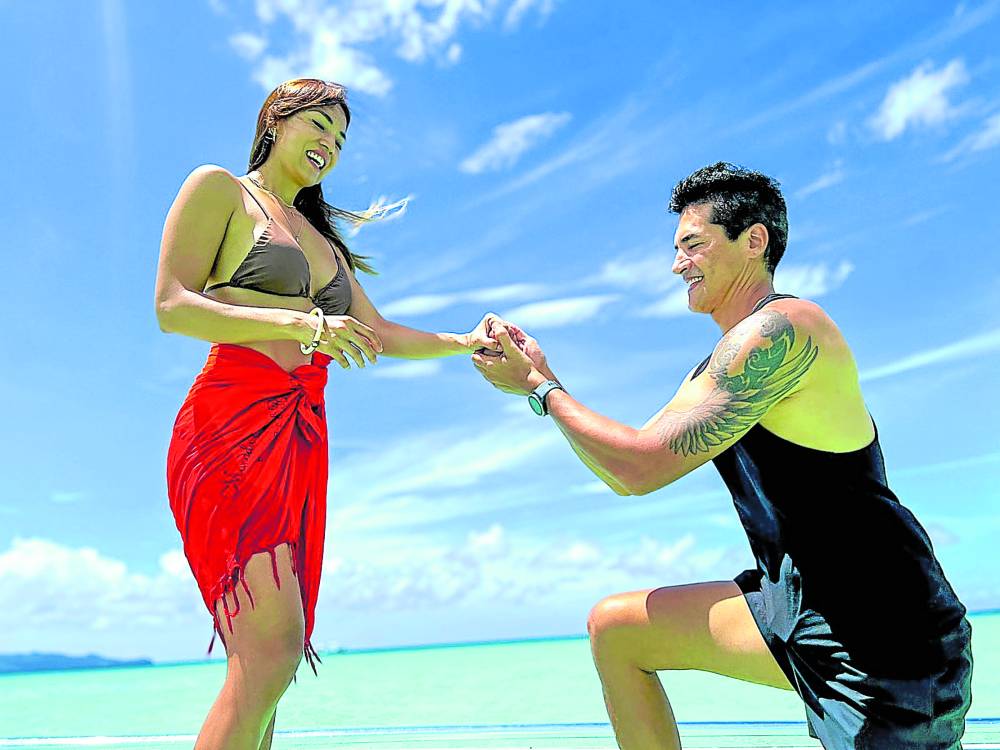 Would you say that it’s better for couples to live together before taking the plunge, like what you and Troy did?I don’t think it’s for everybody. It might not work for others. From my experience, it’s not even about staying in one roof with the person. The key when you live together is if you can still have your “me time” and not lose yourself in the relationship. Individuality is very important, even if you have a live-in partner.

What scares you about marriage?I’m not sure how it feels to be married, but I’m guessing it should be the same. I try not to overthink it, or expect that when you’re married, the love must get deeper. Pag love kasi, kasal man or hindi, there should be loyalty and trust.

What was the toughest chapter in your relationship?Our first few years of being together. Being active in show biz back then made our relationship a little fragile. There were so many doubts and fears if we would make it. 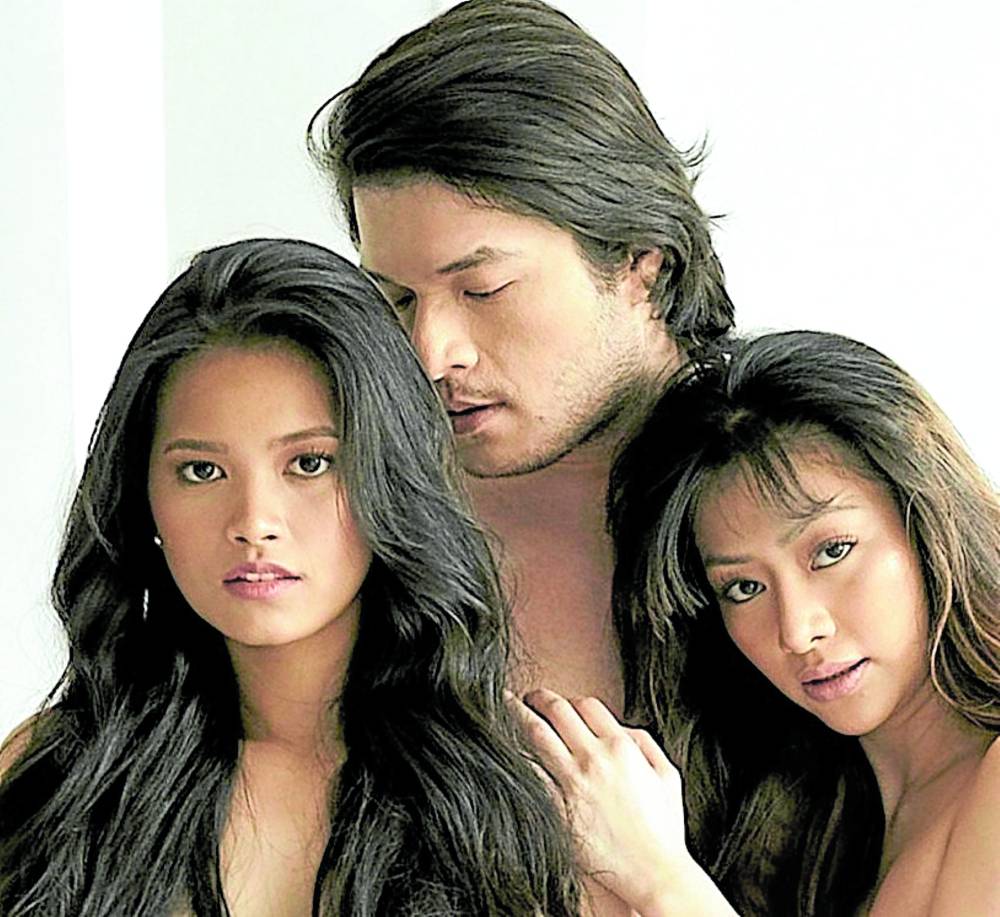 What’s your advice for other show biz couples?Know your priorities first. Set what’s your goal now to make a better future … for yourself or your family. Make better choices, don’t rush, then believe that if it’s meant to be, the heart will find a way.

For you, what would be unforgivable in a marriage?Cheating. Maybe in time, I can forgive but I won’t give a second chance.

Life is too short to be boring. So a bit of “naughtiness” is necessary to spice things up. Just like what happens in “X-Deal 2” (now streaming on Vivamax). The sizzling film directed by Lawrence Fajardo stars Rob Quinto, Angela Morena and Josef Elizalde. Watch how a playful dare and reckless bargain change the lives of the “trio loco” who let lust lead the way as they love dangerously.

Here are quotes from Angela (A), Josef (J) and Rob (R):A: Unlike in our movie, I won’t have sex with an “ex.” It will only open old wounds and slow down the process of moving on.

R: Just like in our film, I am open to the idea of falling for a lesbian. Love knows no gender.

A: I have learned how to detach myself from the characters I portray, so I don’t fall for my scene partner even if we have love scenes.

J: If my girl is a virgin and is not willing to have sex yet, I respect that. If she’s not a virgin anymore, it’s no big deal.

R: The first “Ex Deal” was such a hit in 2011, that’s why we have this sequel. But the new film has a different story, with new characters and more “pasabog.”